INFINITI last week announced that an all-new electrified platform is being developed by the Motor Company, according to a press release on Nissan Motor Corporation website. The company also confirms that the vehicle platform which will enable the luxury automobile maker to produce cars that are electrified is inspired by its Q Inspiration concept car. And production will be set by 2023.

This announcement was made by Roland Krueger, the chairman and global president of INFINITI during a special Auto China preview event which took place at the INFINITI Brand Experience Center in Beijing.

“INFINITI is developing a new platform for electrified vehicles inspired by the Q Inspiration concept car, which shows the new design language for the age of autonomy and electrification. We very much had China in mind designing the Q Inspiration, which shows a very sporty, performance-oriented electric concept, with a much bigger interior space,” said Krueger.

The Q Inspiration presents a minimalist interior which contrasts with its richly tailored surfaces with crisp, precise details. The car is a beautiful ride with a Tesla-esque windshield-sunroof and a hybrid short hood. Its coupe-like appearance and elongated silhouette refrain from the structure of standard sedans. It features an elaborate dashboard that creates a warm and tranquil diving experience. The exterior of the Q Inspiration features vivid and concise lines with uniquely unrivaled proportions. 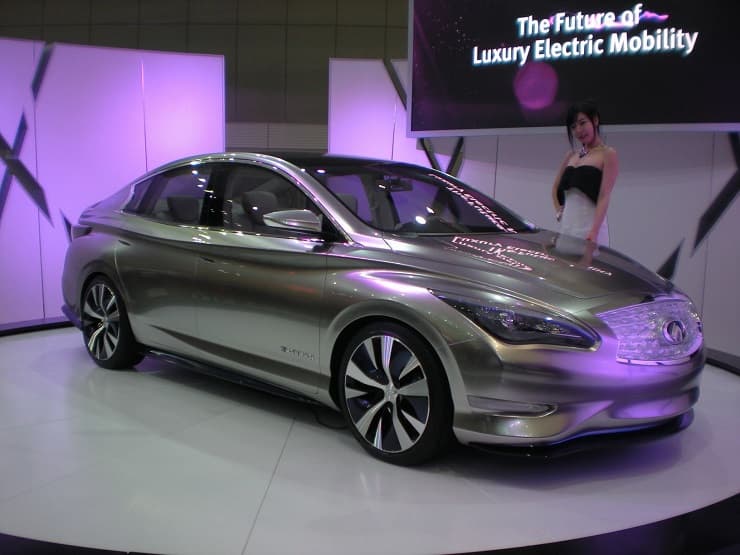 Advanced powertrains have liberated INFINITI’s designers from the constraints of traditional powertrain architecture, broadening the scope for INFINITI. And this has led to the integration of modern technology and craftsmanship that plays a major role in its spacious interior. Also, modern technology has been harnessed by the company to create a comfortable interior that enriches the driving experience with materials of the best quality crafted by its artists.

The concept car is also equipped with various autonomous technologies including Nissan’s ProPILOT self-driving tech, autonomous multilane highway driving, intersection auto-navigation, and a digital dashboard which all combines to reduce disturbance, allowing for a tranquil atmosphere.

INFINITI disclosed that the vehicle’s engine adjusts its compression to improve power ratio and fuel economy efficiently. More details had it that the powertrain provides the shove of a V6 petrol engine mated to the efficiency of a four-pot diesel,  which means it combines the speed and performance of a gasoline-powered engine with the efficiency and torque of a diesel or the hybrid one.

INFINITI has also confirmed the company’s commitment to electrification, which accounts for vehicles with reduced emission, fuel economy and increased performance. INFINITI’s operation in China is through a partnership with China’s largest automotive joint venture, Dongfeng Motor Company Ltd.

Anna Domanska
Anna Domanska is an Industry Leaders Magazine author possessing wide-range of knowledge for Business News. She is an avid reader and writer of Business and CEO Magazines and a rigorous follower of Business Leaders.
« This Wind Turbine Will Make the Same Amount of Energy as Two Coal Plants
5 Takeaways from Tesla’s First Quarter Earnings 2018 »
Leave a Comment
Close