In Minnesota, smartphone theft is now a thing of the past

July 1st, 2015 became a historic day for the people of Minnesota when Governor Mark Dayton signed ‘kill switch’ bill, making it illegal to sell a smartphone without pre-installed antitheft options. Smartphone owners can remotely disable and wipe off memory from their cellphone in case of theft making the smartphone useless. The kill-switch bill has been requested by Police Departments from across the U.S. due to a horrific increase in smartphone robberies and other such high-value devices. 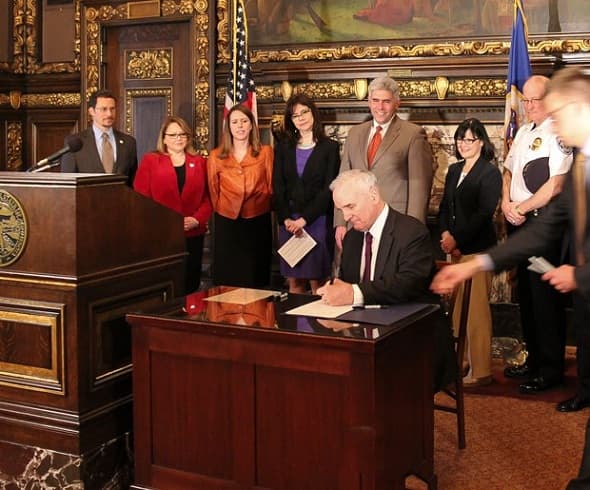 Image: Governor Mark Dayton signed smartphone ‘kill switch’ legislation in to the law on Wednesday, May 14.

“This law will help combat the growing number of violent cellphone thefts in Minnesota,” said Gov. Mark Dayton on Wednesday.

According to the FCC, one in three robberies involves smartphone theft. The kill-switch law was written with the aim to curb down smartphone theft. The law will be affective from July 1, 2015, making it illegal to sell or purchase a smartphone in the state of Minnesota without a pre-installed kill-switch or anti-theft prevention software. The legislation has the potential to slay million dollar cellphone insurance industry since it has a few more features. The law also requires retailers to pay sellers by check, store credit or electronic transfer (leaving a paper trail) criminalizing cash transactions.

Surprisingly, in the text of the law, you will find that the smartphones don’t require kill switch. The cellphones need to be “equipped with preloaded antitheft functionality or be capable of downloading that functionality”. The bill doesn’t specify what ‘anti-theft’ means, nor does it provide software specifications.

In a study conducted at Creighton University, such preventive measures could save up to $2.5 billion a year for consumers.

“Smartphone theft is an epidemic not just in Minnesota but across the country. Literally one out of every three robberies in the United States is related to smartphone theft, and they’re becoming increasingly violent, “stated Joe Atkins of the Minnesota State House, further describing the law as a necessary vaccine.

According to officials from the University of Minnesota, up to 62% of on-campus robberies involved cellphone and tablets.

Not everybody is happy with the legislation. The CTIA Wireless Association on a number of occasions said that software’s like Find My iPhone and Android Device Manager as well the stolen smartphone database makes it unnecessary to require such laws.

Christy Gren
Christy Gren is an Industry Specialist Reporter at Industry Leaders Magazine she enjoys writing about Unicorns, Silicon Valley, Startups, Business Leaders and Innovators. Her articles provide an insight about the Power Players in the field of Technology, Auto, Manufacturing, and F&B.
« Microsoft Streamlines Outlook.com With Advanced Rules, New Undo Options And More
Keyless, Solar-powered Bike Lock that Alerts you When Someone Tries to Steal your Bike »
Leave a Comment
Close