The U.S. Department of Transportation’s Federal Aviation Administration took a giant step on Tuesday by easing restrictions on commercial unmanned aircraft systems (UAS) use over land and water in the U.S. Of all companies, oil company British Petroleum and its drone partner AeroVironment have secured the approval to fly an AeroVironment Puma AE for aerial surveys over Prudhoe Bay oil operations in Alaska (which is home to the largest oilfield in North America) to survey pipelines, roads, and other infrastructure for BP. “These surveys on Alaska’s North Slope are another important step toward broader commercial use of unmanned aircraft,” said Transportation Secretary Anthony Foxx. “The technology is quickly changing, and the opportunities are growing.” 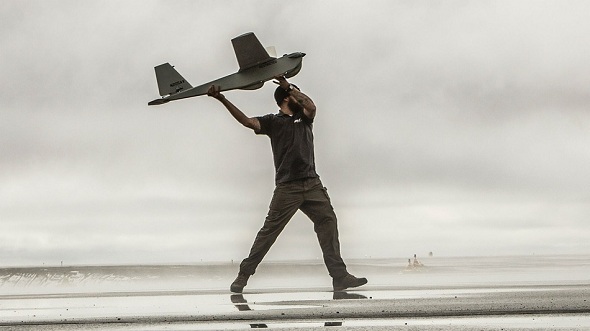 The Puma AE is a small, hand-launched UAS that is about 4 1/2 feet long and has a wingspan of 9 feet. Using the information generated by the Puma’s sensors, BP hopes to target maintenance activities on specific roads and infrastructure, which will save time and support safety and operational reliability goals, while helping to protect the sensitive North Slope environment.

The FAA recently made some changes to its data sheet of the Puma’s restricted category type (restriction was issued last summer) and thus, allowing operations over land once AeroVironment demonstrated that the Puma could perform flights safely. BP first approached the FAA over a year ago, with information regarding drone flight, according to AeroVironment. AeroVironment then performed several tests including 3D road mapping, 3D gravel pit volumetric analysis, visual and 3D pipeline analysis, general topography and environmental monitoring services, its wildlife protection abilities, ice floe monitoring, search and rescue and oil spill response – in order to secure permit from the FAA. On 8th June 2014, AeroVironment performed the first commercial flight since the issue of the permit for BP. The four and a half foot long with a nine feet wide wingspan Puma AE drone is hand launched and resembles a plane than most quadcopters that AE companies develop. Puma AE is outfitted with sensor payloads that produce imagery and data for 3D processing of computerized models of roads, pads, pipelines and other actionable information including precision volumetric measurement and topographic analysis of gravel pits at the North Slope field.

“This new solution is now helping BP manage its extensive Prudhoe Bay field operations in a way that enhances safety, protects the environment, improves productivity and accomplishes activities never before possible,” AeroVironment chairman and CEO Tim Conver said in a statement. “This is an important achievement for our joint team and for the industry in demonstrating the safe and effective use of our proven UAS [unmanned aircraft system] technology for commercial applications.” Just last week, the FAA said it was considering giving permission to a handful of film-making companies to use drones for aerial photography. Last year, the agency had approved unmanned commercial aircraft flights over the Arctic Ocean. The latest regulatory exemption is seen as a significant step that will lead to benefiting an increased number entrepreneurs, businesses, real estate agents and film-makers once the government permits more commercial operators to carry on commercial use of drones.

Anna Domanska
Anna Domanska is an Industry Leaders Magazine author possessing wide-range of knowledge for Business News. She is an avid reader and writer of Business and CEO Magazines and a rigorous follower of Business Leaders.
« Cybercrime Estimated To Cost World Economy About $445 Billion Annually
Google to acquire satellite company Skybox Imaging for $500 million »
Leave a Comment
Close