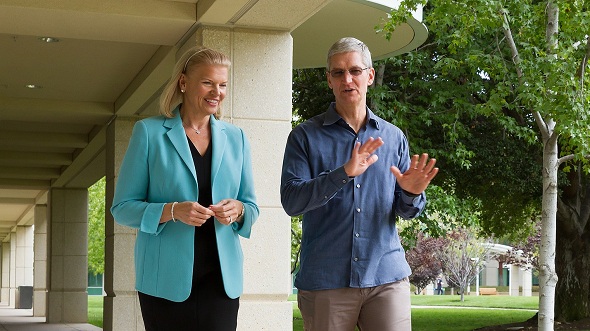 IBM and Apple plan to develop more than 100 industry-specific enterprise solutions including native apps developed exclusively for the iOS platform along with IBM cloud services, analytics and security.

Two tech titans who were historically fierce rivals are partnering up. Apple and International Business Machines Corp announced an agreement on Tuesday where IBM will develop exclusive iPhone and iPad apps for Apple devices geared at enterprise clients. Neither Apple nor IBM disclosed the financial terms of the deal.

The announcement of the deal was made a couple of days before IBM releases its second quarter earnings. Following a string of mobile software acquisitions, the company is trying to turn its focus on software and services as its hardware unit continues to sink. The company is hopeful that its software business will contribute half of its total profit by the year 2015.

The companies plan to develop more than 100 industry-specific enterprise solutions including native apps developed exclusively for the iOS platform along with IBM cloud services, analytics and security. As part of the agreement IBM will also sell iPads and iPhones tailored to particular industries.

The apps will be ready in the fall, which will be targeting industry specific issues in banking, healthcare, travel, retail, transportation and telecommunications, the companies said.

“We wanted to focus on creating an absolutely irresistible workflow and processes and a design of apps that can be used by every user in the organization,” Bridget van Kralingen, IBM’s senior vice president of global business services said from Apple headquarters in Cupertino, California.

The partnership, which was in the making since six months will offer a whole suite of services geared at security and analytics, device management tools and cloud services optimized for Apple’s mobile operating system, iOS. Apple in turn will provide on-site repair and replacement services known as AppleCare to enterprise customers. The devices will operate via wireless carriers chosen by the user.

The announcement comes with Apple trying to amplify growth amid a worldwide onslaught of tablets and smartphones using the Google Android operating system. While Apple is popular among many users, its usage in the corporate sector has been more limited.

This deal seems potentially huge, assuming both companies deliver on their respective software solutions. The benefits to IBM are obvious, it gets to expand business into touchscreens and tablets, and it provides businesses a guaranteed solution for software and hardware.

A survey conducted by Strategy Analytics reported Android collected nearly 65.8 percent of global tablet sales in the first quarter, up from 53 percent last year. Meanwhile, Apple saw iPad sales sink and its market share slumped to 28.4 percent from 40.3 percent a year ago.

Christy Gren
Christy Gren is an Industry Specialist Reporter at Industry Leaders Magazine she enjoys writing about Unicorns, Silicon Valley, Startups, Business Leaders and Innovators. Her articles provide an insight about the Power Players in the field of Technology, Auto, Manufacturing, and F&B.
« Google Announces Project Zero, An Elite Hacker Squad To Fix The Internet
Facebook tests new ‘buy’ button to let users purchase products that are advertised on its social network »
Leave a Comment
Close