2020 Hyundai Sonata Hybrid vs Camry vs Accord

Hyundai Enters the Futuristic Age with Its Prophecy Concept Car

Hyundai’s first electric vehicle with a solar panel roof has been launched for the Korean market. The technology outfitted in the Sonata hybrid has been launched in the Korean market. The automaker claims that this next-gen technology would power up to 60 percent of the EV’s battery.  The panels would provide enough power to propel the Sonata for 1,300km (800miles) a year, Hyundai added.

The solar panel can charge the vehicle’s battery even while driving. Along with it, the harvested solar energy could boost fuel efficiency and lower CO2 emissions. 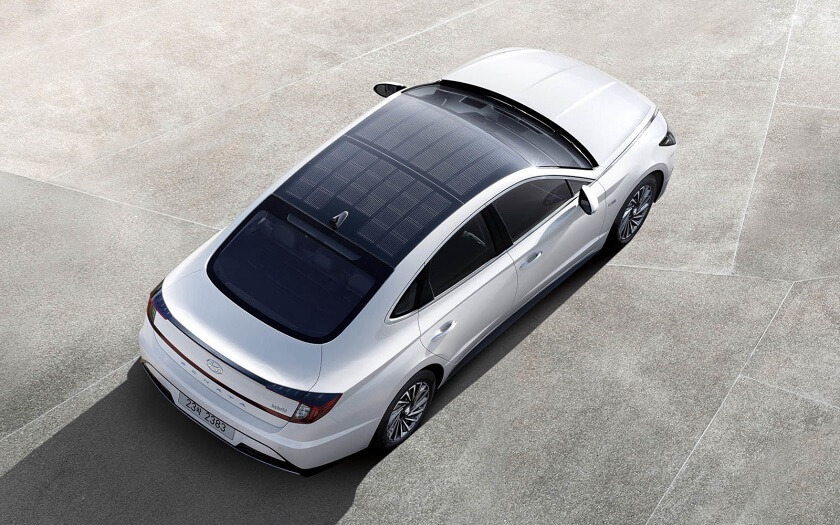 Last year Hyundai revealed its plans to roll out solar panel roofs for both its electric vehicles and non-electric vehicles. After the Hybrid Sonata with solar panel roof launch, next on the company’s list is to launch similar technology for non-combustible cars. The company is also working on creating a semi-transparent solar roof that will help light up the car’s interior along with charging the battery.

This technology, however, is not the first-of-its-kind. Previously, the Karma Revero was launched last year with a solar roof and so was a Toyota Prius covered in solar cells.  The Hyundai Sonata with solar roof is expected to be a more affordable alternative. The price is yet to be revealed by the company.

The arrival date of the Hyundai Sonata hybrid with solar panel roof in the US market is also not revealed yet. But after Korea, the US is expected to the next stop for this next-gen car. Also on Hyundai’s to-do list is the launch of Hyundai cars with AI assistants to enhance driving experience and safety.

The Sonata Hybrid is powered with a 2.0-liter, four-cylinder engine with electric assist and has exciting features like the ‘digital key’ – a functionality which allows a driver to start his Sonata Hybrid with a smartphone app.

Christy Gren
Christy Gren is an Industry Specialist Reporter at Industry Leaders Magazine she enjoys writing about Unicorns, Silicon Valley, Startups, Business Leaders and Innovators. Her articles provide an insight about the Power Players in the field of Technology, Auto, Manufacturing, and F&B.
« 5 Business Leaders Revving up the Logistics Industry
Leadership Lessons from 3 Influential Women Leaders in the Auto Industry »
Leave a Comment
Close

Much like the flying car, the self-driving car has appeared frequently in sci-fi movies and TV shows. Who could forget Bruce Wayne’s favor...
4 hours ago

Europe’s data protection laws under the General Data Protection Regulation need to be revised to meet the post-pandemic world’s ...
8 hours ago