Hydrogen fuel market will take off, driven by both public and private investments around the globe.

Salt caverns are a cost-optimal way to store hydrogen fuel for convenient use, and countries need to be prepared with this technology to store energy.

Climate change crises that are plaguing our world, including an increasing number of hurricanes, wildfire in the US, and Serbia, depleting arctic oceans and melting ice cover releasing methane into the atmosphere, have forced the world to take a relook at its commitment to reducing harmful emissions.

The warming of global temperature at unprecedented rates is leading to climate events that the world is not prepared to cope.

What would help though is a transition to renewable sources for our energy needs and gradual weaning away from fossil fuel dependence.

A safe alternative is hydrogen power. Hydrogen technology is poised to take off due to falling production costs, technological improvements, and a global push toward sustainable options, according to Bank of America. The firm believes this will generate $2.5 trillion in direct revenue — or $4 trillion if revenue from associated products such as fuel cell vehicles is counted with the total market expected to reach $11 trillion by 2050.

Major firms such as BP, Siemens Energy, Shell and Air Liquide are all ready to invest in the sources. A great challenge facing these companies is storage.

One option is to store hydrogen in salt domes, a column of salt surrounded by sedimentary layers, with can be turned into a renewable energy source holder.

The Advanced Clean Energy Storage (ACES) project has plans to build such domes to hold 1,000 megawatts of clean power. Last year, Mitsubishi Hitachi Power Systems (MHPS), a maker of gas turbines, and Magnum Development, which owns salt caverns for liquid fuel storage, announced that it will come together to combine technologies such as renewable hydrogen, solid-oxide fuel cells, and compressed air energy storage. The storage facility would initially have enough energy to power 150,000 households for one year. The project will be operational by 2025. The first phase of the ACES project will provide 150,000 MWh of renewable power storage capacity, according to MHPS. 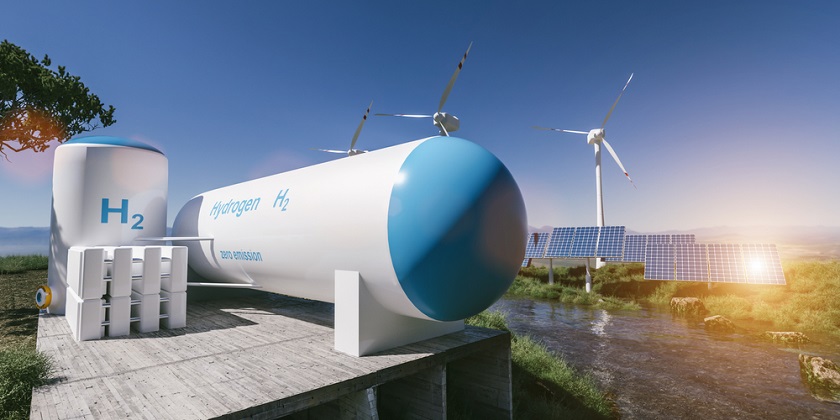 Hydrogen power will generate $2.5 trillion in direct revenue — or $4 trillion if revenue from associated products such as fuel cell vehicles is counted with the total market expected to reach $11 trillion by 2050.

“California curtailed between 150,000-300,000 MWh of excess renewable energy per month through the spring of 2020, yet saw its first rolling blackouts in August because the grid was short on energy,” says Paul Browning, CEO of MHPS Americas. “Long-duration energy storage projects like ours that are designed to shift excess energy from periods of oversupply, like California in the spring, to periods of undersupply, like California in late summer, are critical to ensure similar events are avoided as we continue to make significant strides towards deep decarbonization.”

The ACES project will be part of the Intermountain Power Project, a coal-fired plant operated by the Los Angeles Department of Water and Power that will be converted to hydrogen and natural gas by 2025. It’s scheduled to be all green hydrogen by 2045.

“The formation has the potential to create up to 100 caverns, each one capable of holding 150,000 MWh of energy,” says Browning. “It would take 40,000 shipping containers of batteries to store that much energy in each cavern.”

By 2050, U.S. demand for hydrogen power could jump to 22 million to 41 million metric tons per year, up from 10 million today, according to a study released this month by the U.S. Department of Energy’s National Renewable Energy Laboratory.

Storing energy sources underground is not new. Emergency crude oil has been stored in underground salt caverns on the Gulf Coast for a long time. This is a cost-effective method as it is 10 times cheaper than storing it in tanks.

The U.S. Strategic Petroleum Reserve has 60 enormous caverns. Caverns can be created in salt domes by drilling into the salt dome and injecting the rock with water, which dissolves the salt, which then can be extracted leaving behind caverns.

Hydrogen electrolyzers can convert water into hydrogen by using renewable energy from solar and other sources. The hydrogen can then be stored, and reconverted to electricity when needed.

Europe is also aggressively looking to convert to hydrogen fuel. The European Commission wants hydrogen fuel share to go up from the present 2% to nearly 13 to 14% by 2050.

Germany has brought together 100 companies to build a slat cavern in the Central German Chemical Triangle in Saxony-Anhalt with about 150,000 MWh of energy from wind power-generated hydrogen. Meanwhile, French gas utility Teréga and Hydrogène de France have agreed to launch the HyGéo pilot project in a disused salt cavern in southwestern France’s Nouvelle-Aquitaine region.

“Underground storage, in salt caverns or in porous media (i.e., in aquifers or in depleted oil and gas fields) is the only way to cope with big storage capacities,” says Louis Londe, technical director at Geostock, a French company specializing in underground storage. “Many hydrogen cavern projects for energy storage are blooming in Europe. At present, they are at the design stage. Not surprisingly, the leading countries are those where salt is the most present: Germany, U.K., Ireland, France, Netherlands.”

A study published by the International Journal of Hydrogen Energy says that Europe has enough salt formations on and offshore to theoretically store about 85 petawatt hours of hydrogen power. The figure is hypothetical but 1 PWh of hydrogen is enough to supply today’s electricity demand in Germany for an entire year, says Dilara Gulcin Caglayan, lead author of the study and a scientist at the German research center Forschungszentrum Jülich’s Institute of Energy and Climate Research.

“Our calculations show that without implementation of hydrogen salt caverns, there’s no cost-optimal pathway to achieve our climate goals,” says the institute’s deputy director Martin Robinius, a coauthor of the study. “By 2040, we will need a lot of hydrogen salt caverns, but if we don’t start building them now, we won’t be able to build them to scale to meet those goals.”

The European Commission has a hydrogen power roadmap to reduce carbon emissions by half by 2030.

“The issue of storage is, of course, key to delivering energy transition and in this respect hydrogen and hydrogen technologies have a critical role to play,” says Jorgo Chatzimarkakis, secretary-general of Hydrogen Europe, an alliance of about 250 companies and research organizations that has called for Covid-19 recovery investment of $65 billion in salt cavern storage to 2030 to build hydrogen capacity of 3 million metric tons. “Large scale hydrogen storage facilities, mainly salt caverns and possibly some empty gas fields, need to be part of hydrogen infrastructure.”

Christy Gren
Christy Gren is an Industry Specialist Reporter at Industry Leaders Magazine she enjoys writing about Unicorns, Silicon Valley, Startups, Business Leaders and Innovators. Her articles provide an insight about the Power Players in the field of Technology, Auto, Manufacturing, and F&B.
« Dunkin’ acquisition by Inspire Brands: A synergistic move?
Walmart gets rid of inventory robots, says human as good »
Leave a Comment
Close