HTC has just announced the successor to the excellent Desire 816. The brand new super colourful handset called the Desire 820 is the latest addition to HTC’s Desire 8 series. The Desire device, which was announced at the pre-IFA event in Berlin promises to offer versatility and a good all-round mobile experience at an affordable price. 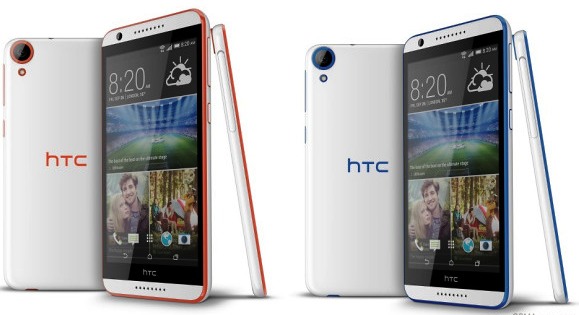 “Our new HTC Desire model gives entertainment lovers exactly what they are looking for; a powerful, fast, stylish smartphone that delivers their favourite content on a big screen at a competitive price. With the HTC Desire 820, we’ve combined the most advanced technology with the best possible entertainment experience and bold, distinctive design, to deliver a handset that is both desirable and affordable.” said Peter Chou, HTC CEO.

Following in the footsteps of the Desire 816, the newest variant of the HTC Desire 8 series has a decent line-up of specs. The new phone sports a generous 5.5 inches720p (1280 x 720) panel screen, Qualcomm’s Snapdragon 615 64-bit octa-core processor (four 1.5GHz cores and four 1.0GHz cores) and an impressive 8 megapixels front camera that’s capable of recording in 1080p. Around the rear of the Desire 820 there’s a 13-megapixel BSI camera with a 28mm lens and an f/2.2 aperture again capable of recording 1080p. Currently, the resolution of the 820 is the highest among any available smartphones in the market. The device comes with multiple features including digital makeup, photo booth, zoe highlights and the ability to combine two faces together. 2GB of RAM is also part of the package while the device comes with 16GB of internal storage which is expandable using microSD cards up to 128GB.

The device features a Double Shot construction technique and has a two tone unibody design with many colours fused into one solid piece. The device will be available in a bunch of different colours including black, orange, pink, red, turquoise and multiple shades of white and grey.

The handset is thin at 7.74 mm making it a very slim phone and weighs so light at only 155 grams. Also included with the device is a return of the Dot View case, which featured on the HTC One M8. This lets the user to use the phone, answer calls and dismiss notifications without opening the case. Its dot matrix design also lets users choose wallpaper from a range of 18 images or themes in the gallery to create wallpapers that are personal to them.

There’s an embedded 2,600mAh battery powering the phone, which HTC says will give up to 22.4 hours of talk time on 3G or up to 424hrs of 3G standby. Certain global markets will get a dual-SIM version, too. The device will be running on Android 4.4 KitKat though HTC has promised the device will be updated to Android L in the future.

While there has been no word on the pricing or specific carriers at this stage, HTC says the Desire 820 will be going on sale from the end of September this year.