Howard Schultz Steps Down As Starbucks CEO, COO Kevin Johnson To Replace Him

The Starbucks Corporation announced on Thursday, through its official website, that the Starbucks’ CEO Howard Schultz is stepping down.

The resignation of Howard Schultz will be applicable from the 3rd of April, 2017. Kevin Johnson, who is currently Starbucks’ President and COO, will take his place. Along with the role of the CEO, Johnson will also take up the responsibility of leading the Starbucks’ global business with its operations.

Will Kevin Johnson be a better Starbucks’ CEO than Howard Schultz?

Howard Schultz joined Starbucks in the year 1982, when it was still in its developing phase. At this time, the company had only four stores which have developed significantly to the present day. Schultz contributed to a great level in making Starbucks the world’s largest coffee business. He also initiated social impact issues like gay rights, gun violence, race relations, student debt, and veterans’ rights.

On April 3rd, he will be appointed as the executive chairman of the company and will also focus on the company’s association with these social impact issues. Schultz personally selected his successor Kevin Johnson to take up his position. Schultz will now shift his focus to the Starbucks Reserve, which is an ‘ultra premium’ retail plan.

Kevin Johnson, who will take up the position of the Starbucks’ CEO, has been a board member of the company for the past seven years. Johnson was considered for this position as he has helped the company grow on a global platform at various new geographical locations as well. He has massive experience in handling the core support functions of various departments of Starbucks. This includes fields like supply chain, human resources, marketing, mobile and digital platforms. Considering this, Johnson will be capable of handling the responsibilities of a Starbucks’ CEO efficiently. 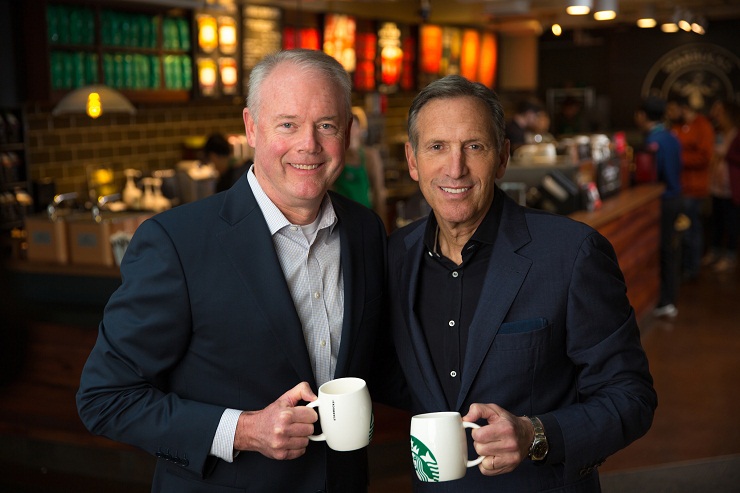 The Starbucks’ CEO Howard Schultz will be replaced by Kevin Johnson in 2017.

Currently, Starbucks is on an all-time rise as it has 25,000 retail stores globally. The growth rate of the company is impressive as every year; it adds about 2,000 stores all over the world. This shows the popularity of Starbucks as a brand at various geographical locations and its consistent demand.

Apart from this, the Starbucks Corporation is an efficient employer. For the betterment of its workforce, the company introduced a full health benefits program in 1988. Under this program, it provided health benefits to its full-time and part-time employees as well as their domestic partners. This was a significant move as it helps in increasing the company’s credibility in the business market.

In 1991, Starbucks introduced a stock-option program for its part-time employees, to teach them basics about the business. Starbucks was the first American company to take such productive initiatives for its employees. All these programs are into practice till date. Therefore, there are high expectations from Johnson as a Starbucks’ CEO. Business experts are inquisitive about the kind of business plans he has to take the company further.

Carrie Ann
Carrie Ann is Editor-in-Chief at Industry Leaders Magazine, based in Las Vegas. Carrie covers technology, trends, marketing, brands, productivity, and leadership. When she isn’t writing she prefers reading. She loves reading books and articles on business, economics, corporate law, luxury products, artificial intelligence, and latest technology. She’s keen on political discussions and shares an undying passion for gadgets. Follow Carrie Ann on Facebook
« Intel Autonomous Cars will be a Separate Business Unit
LaFerrari: The Most Expensive Car of the Century for a Noble Cause »
Leave a Comment
Close