Howard Schultz, the progressive executive chairman of Starbucks, will step down later this month, ending a 36-year meteoric run at the company. In an interview with The New York Times, he acknowledged he may consider running for president.

“I want to be truthful with you without creating more speculative headlines,” he said. “For some time now, I have been deeply concerned about our country — the growing division at home and our standing in the world.“

Schultz, 64, dedicated his career to bringing his vision of a modern coffee house to the world. This year, Starbucks was named the fifth most admired company in the world by Fortune, marking the 16th year in a row that the company has appeared on the global list. It was also named one of the World’s Most Ethical Companies by the Ethisphere Institute for the 12th consecutive year. 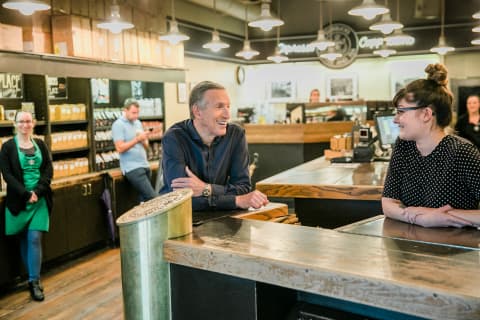 Howard Schultz has overseen explosive growth in three and a half decades at Starbucks. It has grown from 1 store in the early 1980s to more than 27,000 stores in 77 countries, and a market capitalization of $78 billion. His journey began in 1981, when he walked into the first Starbucks store, located in Seattle’s Pike Place Market. The following year, he moved from New York to Seattle, to create a brand that would one day be recognized worldwide.

On April 3, 2017, Howard Schultz stepped down as CEO and handed the baton to then President and CEO Kevin Johnson. Schultz has been a pioneer in workers’ benefits for the last four decades. Since 1988, Starbucks has offered health care to all full-time and part-time employees. In March 2018, the company said it has reached gender and pay equity for all U.S. employees.

Speculation over Howard Schultz considering public service has swirled for years. In 2015 his name floated for president in the New York Times column in which Maureen Dowd wrote, “Potent friends of America’s lord of latte, Howard Schultz, have been pressing him to join the Democratic primary, thinking the time is right for someone who’s not a political lifer.”

Would Howard Schultz’s own baristas vote for him? “With all my heart,” one barista said with a smile.

Anna Domanska
Anna Domanska is an Industry Leaders Magazine author possessing wide-range of knowledge for Business News. She is an avid reader and writer of Business and CEO Magazines and a rigorous follower of Business Leaders.
« The Global Portable Solar Charger Market is Growing
Jet off to Bordeaux in the Most Expensive Private Jet »
Leave a Comment
Close