How much does morning commute really cost around the world?

The cost of public transportation around the world is a primitive term that can be addressed using relative references, at least to educate travelers on the extreme cost of commute in various parts of the globe. It’s not mindless to believe that the world is getting smaller. More people are turning into global nomads as a way to function and they can tell you that commute cost in varied cities can be as figurative as the different faces they meet on each journey.

The common jargon here is: there’s a fare for each journey, except in Tallinn, Estonia that has become the world’s first free public transportation nation. In the Tallinn, registered citizens travel around the nation with an unlimited number of passes for free. The free transport for all in Estonia would make anyone believe that Europe is gradually unfolding a supreme plan to end the dilemma of commute cost squabbling financial opportunities in some of its cities.

Ironically, European cities are holding the flag as the top cities with the most expensive cost of commute, according to Deutsche Bank’s 2017 research. A survey by Expert Market showed more disturbing results for the continent if compared to average monthly income in more cities. According to the report, the cost of commute in San Francisco, Washington, Boston, and New York City is approximately 8%, 9%, 7% and 4% of average monthly income in the cities respectively. Venice, Barcelona, and Madrid recorded 26%, 20% and 18% of the average income in the cities respectively.

Commute cost around the world

Free public transport for all has gained staid attention since after Tallinn’s successful system. But most governments are cynical: they could end up with different results. France, Poland, and Germany are warming up to see how the system works, whereas Wales just ended weekend free bus experiment in May. The cost of public transportation around the world is slightly skewed by the average monthly income in the various cities. London has the highest cost by far, $174 while third world India has a monthly commute cost of $14.6.

Top ten cities with the most expensive commute cost. 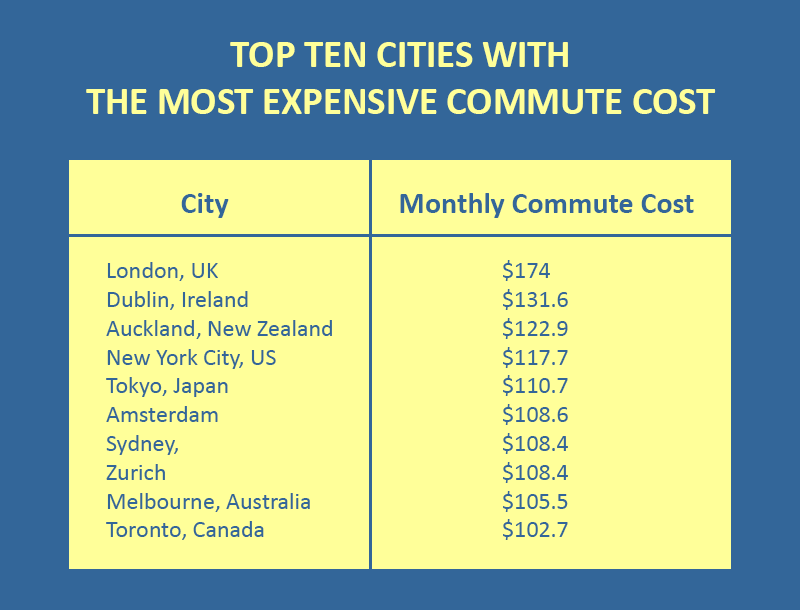 Below is an overview of commute cost in most cities around the world. 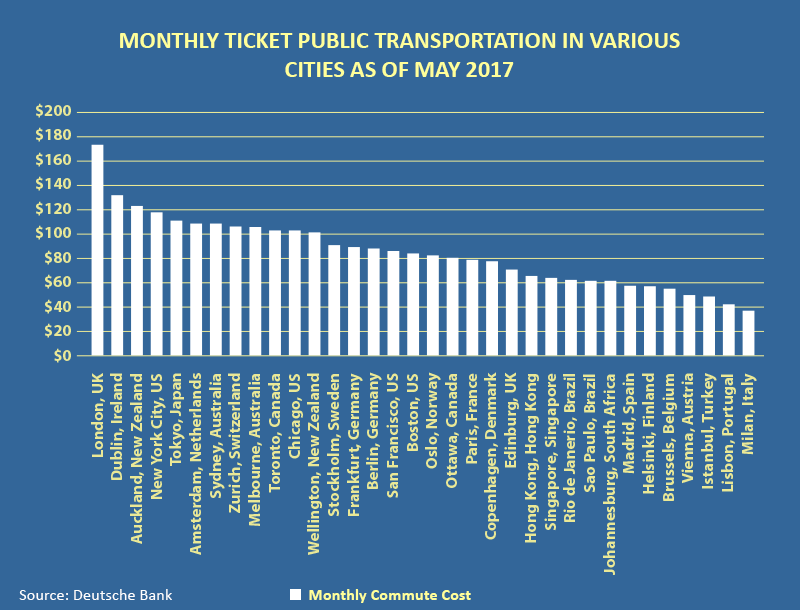 Anna Domanska
Anna Domanska is an Industry Leaders Magazine author possessing wide-range of knowledge for Business News. She is an avid reader and writer of Business and CEO Magazines and a rigorous follower of Business Leaders.
« Power Players: A Profile on Lyft co-founders John Zimmer and Logan Green
Millennials are driving a change in the Automobile Industry »
Leave a Comment
Close