Housing Crisis? Prefabricated, Recycled Plastic could be the answer. 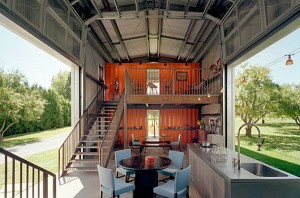 Prefabricated home made from Recycled Plastic

To alleviate the 80,000 units per annum estimated housing shortage in the U.K, the Royal Institution of Chartered Surveyors (RICS) has identified the return of prefab as the most suitable solution!

Team that with making these new prefab homes out of recycled plastic, and pricing them at as little as £20,000, and bingo!

How many birds with one stone, did you say ?

The RICS said that using low-cost housing solutions would not only help ease the current housing shortage, but would also ensure that affordable housing was more readily available for first-time buyers and local authorities.

Home-building from a Shipping Container

Prefabricated houses got a bad name for shoddy design and poor construction after they were churned out by the thousands to solve the post-war housing crisis.

However, contemporary versions of prefab housing – dubbed “modular” homes – as envisaged by the RICS, while still being low-cost, with prices starting at £20,000, would boast state-of-the-art design and impressive “green” credentials.

There would also be provisions for additional modules to be purchased and slotted on as families require more space.

Author of the RICS paper, Dr Chris Goodier, of Loughborough University, said: “The need for more new homes in the UK has never been more critical than it is today. While there is no quick fix to the problem, it is important that the Government and industry consider more innovative solutions to development. Without them, problems such as overcrowding, under-supply and unaffordable housing seem set to continue.”

He added: “UK housebuilding has long been associated with expensive, time-consuming methods and can mean that environmental standards are difficult to maintain. More innovative, modern off-site and modular designs are not only extremely cost-effective but can be constructed with ease in a very short period of time.”

The report suggested that builders start making increased use of these self-contained properties with kitchens and bathrooms, which would be made off-site and then transported to their location. According to the RICS, first-time buyers and local authorities would be able to benefit from this approach, as it would provide low-cost alternatives to address the national housing shortage. 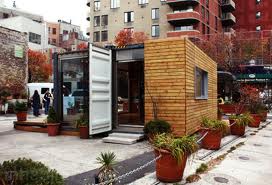 The writers of the RICS report say that while they do not foresee a massive change in the immediate future as regards the dominant nature of new homes constructed by private house-builders in the UK, the structure of the industry is likely to become more diverse, with more specialist firms on sustainability, zero carbon and innovative renewable technologies. “It is very likely to see, again in the future, the coupling and de-coupling of housebuilding and manufacturing, as has appeared previously in its history” says the report.

One of the solutions offered by the report involves constructing these properties from 18 tonnes recycled plastic that would otherwise end up in landfill. If this solution can be realized in practice and perfected, it would definitely open up a whole new arena of “home-building from scrap” !

The recycled plastic proposed for building these homes is called Thermo Poly Rock, a new material created out of recycled plastics and minerals that could otherwise have been consigned to landfill.

The RICS report said that many major mortgage lenders were now prepared to lend against such pre-fab structures, resolving one of the previous problems with the homes.

So what’s the catch?

Doesn’t there always have to be one?

While these proposed modular homes could be constructed within 12 weeks and cost as little as £20,000, the RICS report also mentioned that people would also need to buy a plot of land for them to go on.

In the UK, availability of land (and water) in the right place in the right quantity to put these on is relatively scarce. Immediate repercussion of putting in practice the proposed cheap-housing model? Instead of property prices dropping, the price of land will most likely go up.

After all, it is not the cost of the land, construction, placing the utilities and roads etc that drives the price of a UK house. Or even availability of finance. The main driver is ‘how much is a Brit prepared to buy or sell a property for?’.

So what kind of profits would the developer be looking at when they have the possibility of building for cheap? After all, when was the last time that any buyer of a new home asked how much it cost the developer to build? No, they just fork over the readies at market rates. And the bigger the gap between cost and market price the happier the developer is.