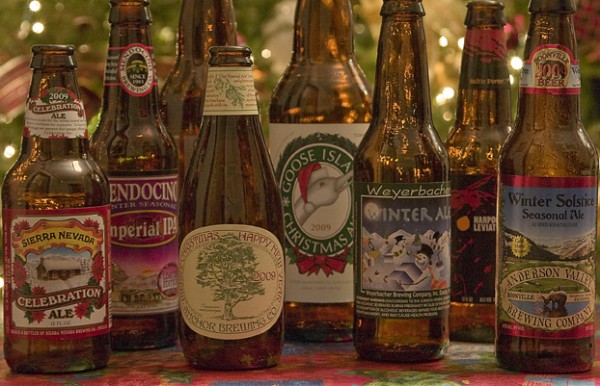 With the holiday season beginning in less than a week, many breweries are coming up with their 2011 holiday beers for consumers to pair with Thanksgiving turkeys and Christmas hams. Fortunately, there’s no eggnog beer or cranberry beer in the mix. Perhaps those will be some of the holiday beers of 2012? Anyway, here are what some breweries around the world are offering as Christmas beers this holiday season.

The Boston-based brewery is offering up a wide selection of 2011 holiday beers, such as the new line of Samuel Adams beers called Single Batch. These holiday beers (Tasman Red, Third Voyage, The Vixen and Griffin’s Bow) are going to be available in a limited supply in standalone bottles, with more alcohol by volume than a typical beer. Single Batch is using some unusual ingredients, including chilies in The Vixen (a twist on the Sam Adams Chocolate Bock) or hops from the Tasmania Sea area in the Tasman Red.

Samuel Adams is also bringing back it’s winter variety pack, which this time includes a new holiday beer called the Black & Brew. Black & Brew is a coffee stout with the Sumatran coffee beans that were added to the barrels of this beer. Other Samuel Adams holiday beer varieties include the Winter Lager and the Old Fezziwwig Ale.

New Belgium Brewing, a Colorado-based craft brewer, unveiled its new holiday beer, Frambozen, earlier this week. Frambozen will be available on bar taps and holiday tables through January 2012. Frambozen takes its name from the Flemish word for raspberries. The beer is inspired by the Framboise beers of Belgium, where the use of raspberries in beer outdates the use of traditional hops.

Another brewery releasing a Belgian-style holiday beer is the Grand Teton Brewing Company, based out of Victor, Idaho. Earlier this month, the brewer announced the release of Coming Home 2011 Holiday Ale, the second release of their annual holiday beer. This year’s Holiday Ale is a Belgian-Style Golden Ale that is rich in flavor and is designed to be a smooth and soothing sipping beer.

Although American breweries are the ones releasing holiday beers and unveiling Chanukah and Christmas beers, there’s nothing stopping international breweries from doing the same within their own countries. The holiday season is a very popular time to drink beer, so why not encourage it be coming up with a few brews to match?