Hochtief: One roof – all solutions 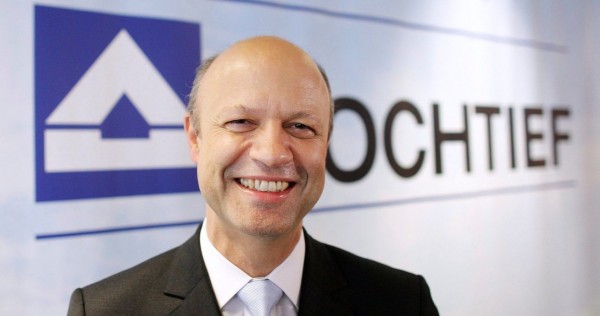 Hochtief Aktiengesellschaft is the eighth-largest provider of construction-related services in the world and market leader in Germany. It has more than 75,000 employees and a sales volume of EUR 23.28 billion in FY 2011. The company is represented in all the world’s major markets. 92 percent of this output was generated abroad.

Hochtief’s account dates back to the 1870s and includes engineering feats such as the transplantation of the Abu Simbel rock temples in Egypt (saving them from the rise of the River Nile caused by the Aswan High Dam), and infrastructure projects like the new Athens International Airport and Germany’s first nuclear power plant. Hochtief is also noted for its involvement with the Bauhaus movement, particularly for its work at Zollverein colliery and later the reconstruction of the famous Kandinsky-Klee house in Dessau; both are now parts of World Heritage Sites.

However, Hochtief’s reputation is tarnished by World War II, when it deployed forced labor on construction projects. It built the Führerbunker in Berlin, scene of Adolf Hitler’s suicide, as well as Hitler’s Berghof retreat and Wolf’s Lair headquarters. More recent constructions have included Bosporus Bridge (Turkey), King Abdulaziz International Airport (Saudi Arabia), and the Messeturmand Commerzbank Tower in Frankfurt. Spanish construction company Grupo ACS, which already had almost 30 percent of Hochtief, launched a bid that would allow ACS to have more than 50 percent of Hochtief in mid September. The bid was approved by the German Federal Financial Supervisory Authority (BaFin) on 29 November 2010. ACS raised the stake in Hochtief to 50.16 percent as of 18 June 2011 taking over control of the company.

Hochtief’s business is shaped by innovative thinking, competence, working in a spirit of partnership and maintaining transparency. Hochtief’s CEO, Dr. jur. Frank Stieler said, “We are a reliable, trustworthy partner to our clients and dedicated to providing quality–in all project phases, for all the modules of our product and service portfolio.”

Dr. Frank believes that implementing these strategic principles as part of their daily routine represents a conscious effort to fulfill their vision. He said, “Hochtief is building the future. Along with our partners, we expand horizons, link people and organizations, create new ways to think and act, and continually enhance the values entrusted to our care.”

Network and added value are the key factors for the company’s lasting business success. Its service spectrum covers the entire project value chain. Based on the three modules develop, build and operate, it delivers integrated services for infrastructure projects, real estate and facilities. It can optimally combine the know-how and services of its various operational units and offer clients customized solutions.

Peter Sassenfeld, CFO (America’s Division) at Hochtief said, “For Hochtief, this means compliance with the respective law and our internal company rules. Within the Group, binding rules of conduct apply: All employees of our Group companies are obliged to act in accordance with the rules defined in the Hochtief Code of Conduct and to gear all of their actions to the internal directives. They have to prove sincerity and fairness in all aspects of their business activities.” As an international provider of construction-related services, Hochtief operates in countries with very different values, political and legal systems. Compliance therefore plays a major role at Hochtief.

Peter Sassenfeld also said, “We take care to ensure that the law and our high internal standards are complied with, and we respond uncompromisingly to any infringements.”

The Hochtief structure reflects the operational alignment of our company and also mirrors the Group’s presence in all important regions internationally. The strategic Management Holding comprises the Executive Board and the Corporate Centers of the Group. This control level is responsible for the strategic and organizational development of HOCHTIEF Aktiengesellschaft.

Using consistent innovation management HOCHTIEF is generating new knowledge in order to open up the business areas of the future for the corporate divisions at an early stage, and to optimize processes. In doing so, HOCHTIEF is already getting involved early on with mega-trends such as climate change and demographic development. Thus innovation is making a major contribution both to increasing the Company’s competitiveness and to value creation.

R&D is a part of every HOCHTIEF project. The projects for which HOCHTIEF provides construction services are not serial productions, but are always unique. As a market leader, it undertakes especially large-scale, demanding projects. That is why customized research and development (R&D) services are part of almost all of its projects. Hochtief’s pioneering developments set standards in the construction industry worldwide. It continues to bolster this leadership position primarily through systematic innovation management in all areas of the company. Hochtief’s innovations also contribute to the continual optimization of internal workflows and processes and set it apart from the competition.