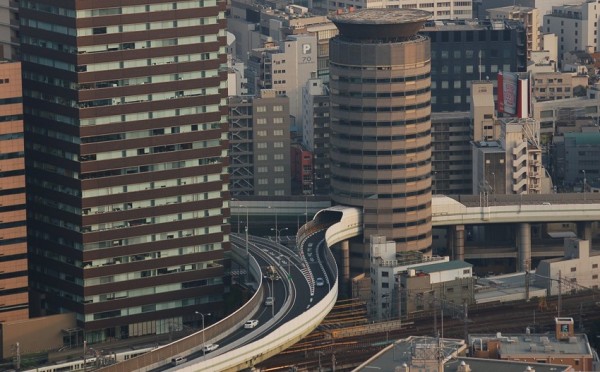 The Gate Tower Building is the first building in Japan to have a highway, the Hansin Expressway, pass through it. And people call it a “beehive” referring to its appearance as a “busy place”.  This highway is part of the Hanshin Expressway, a network of expressways surrounding Osaka, Kobe and Kyoto.

What Made a Highway Pass Through the Building?

Was this a dilemma or the reason for this wonder? It was back in the 80′s, when the city officials and the owners of the land took five long years to come up with this idea of building a highway through the Gate Tower building. The land owners had submitted plans for a new office block and discovered that the city planners had already designated the space above the land as expressway area. But the land owner had no plans of giving up. He negotiated with the Hanshin Expressway Corporation for approximately 5 years to reach the current solution.

Due to the explosive growth in exports led by cars and consumer electronics, the government was left with flush of funds to spend. The government decided to spend this on urban construction projects. Hanshin Expressway was one such project which involved the addition of several entry and exit ramps. The issue wasn’t yet resolved when a problem surfaced.  The small yet critical piece of the city center land intended to support the Umeda exit ramp was owned by a lumber & charcoal firm, which was declining, but the owners weren’t interested in selling the rights of the valuable property. As there was no room to shift the exit ramp, both the parties negotiated… and negotiated… and negotiated and finally resolved the issue after five long years, to create this wonder, though neither side really conceded anything.

After the long waiting, the Gate Tower Building finally got a go-ahead signal and both the projects proceed in sync. It is still a mystery whether the original Gate Tower plan had a ‘hole’ designed right through its 5th, 6th and 7th floors. But, let’s not wonder about it because it’s absolutely irrelevant now. Gate Tower is a commercial building and workers in the Gate Tower Building don’t really notice the Umeda exit incline as they plug away at the desks. The most amazing thing is that the Hanshin Expressway Corporation insulated the building from noise and vibration, an achievement that was accomplished in several ways.

The Hanshin Expressway would definitely require an exceptionally outstanding design to put the plan on the wheels of success. Now this is something ‘Amazing’. The wonder is that the ramp is self-supporting and is designed as a bridge, where all its weight rests on the pillars. It is fascinating to note the pillars nearest the building are structured in a way that they complement the tower’s surfaced facade. Another amazing thing is the “dogleg” bend; about a dozen meters of ramp on both side of the building are bonded in a sort of “muffler” that softens the sounds of vehicles.

There are elevators mounted on the exterior of the tower and for practical reasons and the cars bypass floors 5 through 7. The Gate Tower Building is a flawless example of urban engineering proficiency, determination to crack potentially intractable problems and most of all, desire to reach harmony regardless of the time and trouble required to do so. And that’s how an expressway, the wonder, goes straight through the building. It is potentially difficult to imagine peaceful working on the floors above or below it, but Japan is unstoppable and has the potential to make the impossible possible.

Dhwani Shah
« After Christmas Sales on for Shopaholics
Coconut Water: The Lastest Thing from the Beverage Industry »
Leave a Comment
Close

Accomplished comedienne and writer Tina Fey has described the imposter phenomenon as oscillating between extreme self-doubt and egomania.
6 hours ago