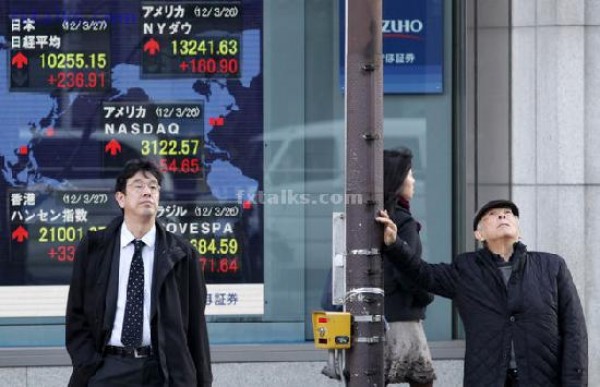 Strong gains in global equities just overnight have made the Asian shares shoot up, especially after hard manufacturing data from the United States, and as leading Asian exporters offset signs of mild recession in Europe.

Australian shares were strengthened Monday after oil prices gathered 2 percent, although oil withdrew from this session. Tetsu Emori, a Tokyo-based commodities fund manager at Astmax Investments said, “The current market environment is favorable in that it is inching higher while digesting caution and concerns about growth prospects, which suggests sentiment is actually quite solid”.

MSCI’s broadest index of Asian shares outside Japan gained 0.5 percent while a yen remained firm. This has hurt Japan’s Nikkei average and it fell 0.5 percent moving further away from a one-year high hit last week. Tetsu Emori lso commented, “One good indicator for growth is oil price, which has remained supported in part by supply disruption concerns, but its firmness is also driven by demand accompanying economic recovery”.

U.S. factory data, which has been stronger-than-expected, pushed U.S. stocks to 4 year highs, though European shares recorded their biggest daily gain in three weeks despite sluggish factory activity in the euro zone. Bae Sung-young, an analyst at Hyundai Securities in Seoul said, “The U.S. stock rally will definitely lend a hand. Worries of a slowdown in China’s economy are starting to settle”.

U.S. manufacturing sector has been growing at a high pace as reported by the Institute for Supply Management. The manufacturing sector picked up from 52.4 in February to 53.4 in March, above a 53.0 forecast. Oil broke from strong gains Monday, with Brent crude futures easing 0.3 percent at $125.07 a barrel after settling up $2.55, while U.S. crude was down 0.3 percent to $104.96 a barrel, after settling up $2.21.It was truly a surprise jump in large factory activity in China and stronger manufacturing in other leading exporters, South Korea and Taiwan, but output was still far from robust.

Barclays Capital analysts said, “Global industrial production is unlikely to resume an uptrend just yet and while the downtrend persists, this remains in a stabilization phase. We remain comfortable with our view that U.S. cyclical out performance will continue to support the USD against low yielding developed market currencies, as well as the CAD against other commodity currencies”.

Investors are likely to remain alert about taking aggressive risks, ahead of key data including U.S. nonfarm payrolls on Friday and China’s first quarter gross domestic product due next week. The U.S. Federal Reserve’s Federal Open Market Committee is expected to issue minutes from its meeting of March 13.

Asian credit markets firmed, with the spread on the iTraxx Asia ex-Japan investment-grade index narrowing by 2 basis points. Shanghai markets closed through Wednesday while European, U.S. and some Asian markets will close on Friday for the long Easter weekend.