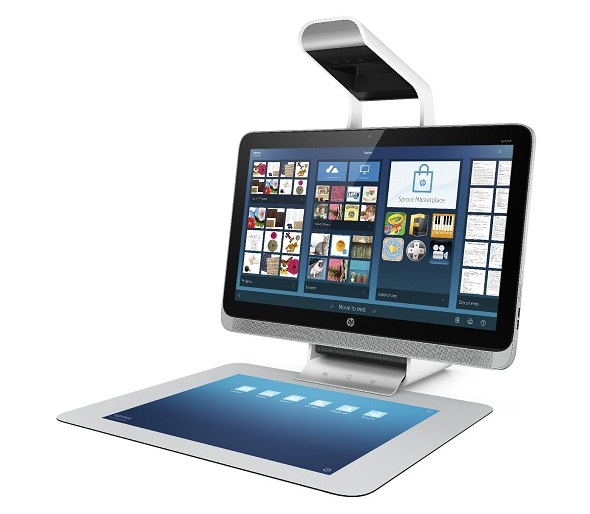 HP all-in-one desktop computer called Sprout that will be available for consumers in stores from Nov. 9 for $1,899. Stores

At an event in downtown New York City, HP announced its much anticipated leap into three-dimensional printing technology for large companies and an interactive desktop computer for consumers.

HP plans to deliver a new 3D printer broadly in 2016 that can produce 3D parts in color and manipulate its strength, elasticity, form, texture, friction as well as electrical and thermal properties. The company said its technology can print 10 times faster than the three-dimensional printers available in the market at the moment with considerably less expense. According to HP estimates, 3D printing of this type could add billions of dollars to the 3D printing materials and hardware market in the future.

“This speed will really help us put 3D printing in more applications and in more and more cases,” said Ramon Pastor, vice president and general manager of HP’s large format printing business in an interview.

HP launched an all-in-one desktop computer called Sprout that will be available for consumers in stores from Nov. 9 for $1,899. Stores that will market the product include Best Buy and Microsoft, among other retailers.

The Sprout sports a host of premium specs, including a 4th-gen Intel Core i7-4790S processor with 8GB of RAM (16GB max) NVIDIA GeForce GT 745A graphics with 2GB of memory and a 1TB hybrid hard drive with 8GB of flash acceleration. There’s also a 1-megapixel webcam, two USB 2.0 ports and two USB 3.0 ports, an SDXC memory card reader, and gigabit ethernet. Sprout has a 23-inch full HD monitor that supports 10-point touch, projector, a four-camera sensory system that can capture 2D and 3D objects and a scanner. The computer also comes with a 20-point touch pad that can replace a keyboard or a mouse.

HP noted several potential uses for its computer. When 2D or 3D objects are placed on the mat, the 4 cameras in the scanner takes in the information which could include anything from documents to books and photos or objects that immediately appear on the screen and they can then be inserted into existing documents. Scanning objects in 3D mode generates a rotatable model.

“We wanted to capture the magic of the personal touch and make it super easy,” said Eric Monsef, vice president of HP’s immersive systems in an interview.