NASA has come up with the first helicopter to fly on another planet. The Ingenuity Mars Helicopter will ride along with NASA’s Mars 2020 Perseverance rover, which will launch from the Cape Canaveral Station in Florida in the summer.

“The Wright Brothers showed that powered flight in Earth’s atmosphere was possible, using an experimental aircraft,” said Håvard Grip, Ingenuity’s chief pilot at NASA’s Jet Propulsion Laboratory in Southern California. “With Ingenuity, we’re trying to do the same for Mars.” 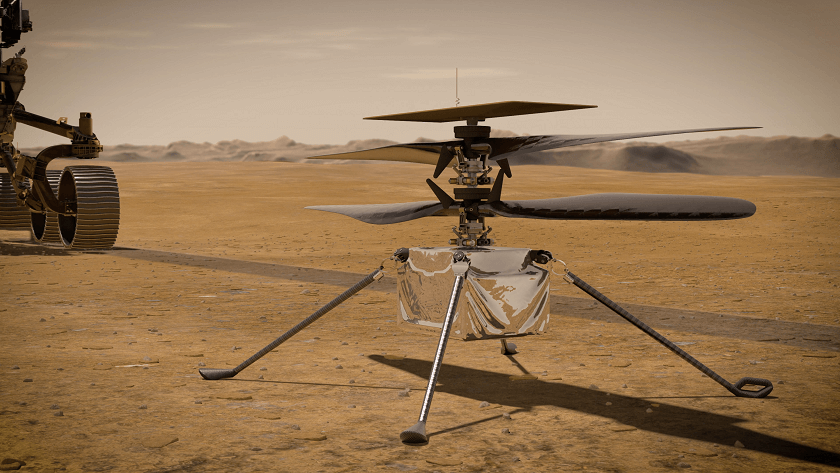 Here are six things you should know about the first helicopter going to another planet:

1) Ingenuity is a flight test similar to the Mars Pathfinder Rover and Mars Cube One t or Cube sats that flew past Mars in 2018. These are small technology experiments to test for the first time the viability of it going forward. It is lightweight, fitted with fiber blades that mover 2400 rpm and has solar batteries.

2.) Ingenuity will attempt to fly in a thin atmosphere, and it is hard to get a lift there. Hence the lightweight and rotor blades that spin so fast.

It is very cold on Mars, with temperatures going below minus 90 degrees Celcius. Ingenuity has undergone tests in a similar simulated environment, but the real deal is always different and full of surprises.

Commands will have to be well-calibrated as they have to be given in advance and need to travel interplanetary. Ingenuity will have a lot of autonomy to make its own decisions about how to fly to a waypoint and keep itself warm.

3) The name Ingenuity was suggested by High school student Vaneeza Rupani of Northport, Alabama. NASA was instantly taken up with the name as the team employed great creativity in getting the helicopter mission off the ground.

“The ingenuity and brilliance of people working hard to overcome the challenges of interplanetary travel are what allow us all to experience the wonders of space exploration,” Rupani wrote. “Ingenuity is what allows people to accomplish amazing things.”

4) Ingenuity has already shown great engineering capacities, and it was through great innovations and repeated experiments that engineers at JPL were able to build this helicopter. It has performed well in a 99% thinner atmosphere than the Earth and has shown the capability to survive in extreme temperatures. It passed its final test in 2019 to make it experiment ready for its flight on the Perseverance to Mars.

5) The Ingenuity team has a set of milestones for the helicopter to pass before it is deemed worthy of going up to the Red Planet.

If the helicopter experiment is successful, the Ingenuity team will attempt up to four other test flights within a 30-Martian-day (31-Earth-day) window.

6) Ingenuity, if able to fly in Mar’s atmosphere, will serve as a precursor for other advanced robotic flying vehicles that can be sent to Mars on other missions. The present rovers and landers gathering information from the ground. An aerial view of the terrain will be helpful in mapping access.

Anna Domanska
Anna Domanska is an Industry Leaders Magazine author possessing wide-range of knowledge for Business News. She is an avid reader and writer of Business and CEO Magazines and a rigorous follower of Business Leaders.
« Fisker IPO: Fisker goes public, valued at $2.9 billion
India an attractive investment destination for global companies »
Leave a Comment
Close

Orange, the French multinational telecommunications corporation, has agreed to sell part of its fixed fiber assets to a consortium of three ...
13 hours ago