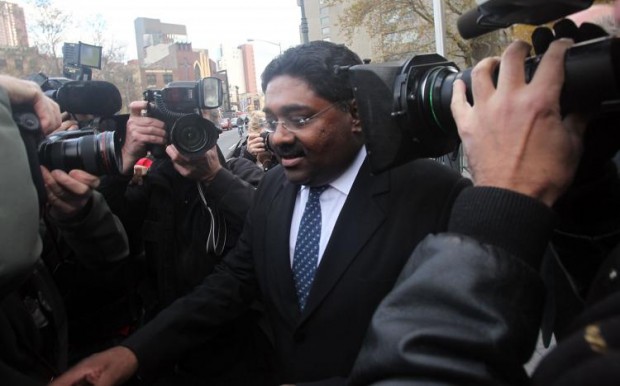 In a historic win against corrupt investment practices, billionaire investor and Galleon Group founder, Raj Rajaratnam, was found guilty on 14 insider-trading and conspiracy charges on Wednesday.

The long ordeal that started with Rajaratnam’s arrest in October 2009 concluded with a seven-week trial in Manhattan federal court, where the jury delivered across-the-board convictions on nine counts of securities fraud and five counts of conspiracy.

However, does Rajaratnam’s fall signify an end of insider trading? Most market analysts think not.

Born in Sri Lanka, Rajaratnam moved to the United States in 1981 to study business at the Pennsylvania’s esteemed Wharton School.

The start of his professional career coinciding with the 1990’s tech boom, while working with a small investment bank, Needham & Company, Rajaratnam became popular as an expert on tech companies.

When the Galleon Group was formed by Rajaratnam in 1997, the investor was popular enough to attract large clients like New Jersey’s state pension fund as well as global banking giants like UBS, Goldman Sachs and Morgan Stanley.

Considered to be one of Wall Street’s brightest investors for years, at its peak, the Galleon Group hedge fund managed assets worth more than $7 billion, with Rajaratnam’s personal wealth estimated at around $1.5 billion.

The fall from being the super-savvy head of one of the world’s largest hedge funds to being a corrupt, greedy investor started when Rajaratnam was arrested in October 2009, being accused of leading an extensive insider-trading loop which included Wall Street traders and top-level execs at the companies like Intel, McKinsey & Co. and Akamai Technologies whose accounts were handled by Galleon.

According to estimates by the authorities, Rajaratnam has, over the years, gained about $63 million from 2006 through 2009, from illegal trading in stocks including Google, Goldman Sachs, eBay and Hilton Worldwide, by using his network of tipsters.

Having been convicted as guilty on all fourteen charges, 53-year old Rajaratnam could be sentenced to anywhere up to 25 years in prison. However, according to lead prosecutor Jonathan Streeter, federal sentencing guidelines would probably require Rajaratnam to serve a prison sentence of between 15½ and 19½ years.

He could also be forced to disgorge tens of millions of dollars in illegal trading profits.

“Mr. Rajaratnam was among the best and the brightest — one of the most educated, successful and privileged professionals in the country,” said Preet Bharara, the United States attorney for Manhattan. “Yet, like so many others recently, he let greed and corruption cause his undoing.”

With federal agents secretly recording Rajaratnam’s telephone conversations over a nine-month stretch in 2008, the evidence that was presented over the course of the trial made public the inside stock tips Rajaratnam swapped in a very business-like fashion with corporate insiders and fellow traders. And most market analysts feel that while the Rajaratnam’s conviction was a big victory against corrupt practices, the seven-week trial only revealed that insider trading is way more pervasive than previously thought.

Given the significant rise of investment firms over the years, in terms of the influence the yield on the trading process as well as the scale of accounts they handle – the industry is currently estimated to be managing more than $2 trillion – these firms have increasingly attracted more inspection.