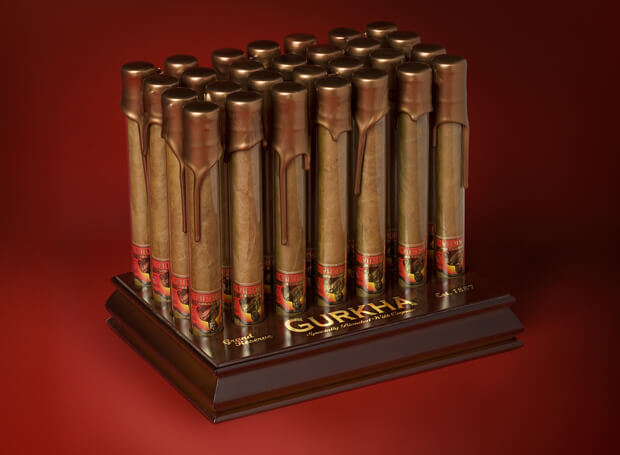 Made from the finest tobaccos and spices, Gurkha Cigars are considered one of the most famous brands of luxury cigars in the world.  Known for their limited release and rare tobacco products, Gurkha Cigars are available at cigar retailers worldwide.

The Gurkha Brand was created in 1989, is wholly owned by the Beach Cigar Group Inc, privately held and led by President, Kaizad (Kaizer) Hansotia and is based in Miami, Florida. With its extraordinary quality and premium blends of tobacco, Gurkha’s cigar brands include the Grand Reserve, Elegance and Shaggy.

Individually hand-rolled, the Gurkha Cigars are made using tobacco which is aged for upto ten years, this factor being critical to the excellent taste of all Gurkha cigars. Even the boxes that house these Gurkha cigars are hand-made; each with fine detail and exquisite finishes that compliment the specific cigar.

The Legend of Gurkha Cigars

At the height of the British rule in India, colonial soldiers began to make their own cigars from the local tobacco. The fondness of the British for these legendary Nepalese fighters inspired them to name their cigars “ Gurkhas.”

After the rule of the Raja Waned, British expatriates living in India continued to smoke Gurkhas produced in the Portuguese territory of Goa. Eventually, However, The Gurkha cigars simply lapsed into obscurity.

Steeped in legend and history, the Gurkha cigars, created more than a century ago has been reborn and remains true to its roots in faraway India. Today, the legend lives on in the premium brand cigars “Gurkha.”

Kaizad Hansotia, founder of the Gurkha Cigar Company, was born in India and raised in Hong Kong and London.

The Gurkha Cigars journey started when Hansotia met a Portuguese man making and selling cigars in Goa, while on vacation, in 1989. Being part of the family watch-making business at the time, Hansotia decided to buy the man’s entire stock and brand name — Gurkha — on the spot so as to have a unique gift to hand out to his customers of the watch company.

One of these early Gurkha cigars landed up with a friend who owned a duty-free shop and who was so taken with the gift that that he decided that he wanted more. The rest, as they say, is history, beginning Hansotia’s inspiring journey of creating “create a piece of furniture with cigars in it.”

The Grand Reserve, the flagship product of Gurkha Cigars, infused with vintage cognac, when introduced by Hansotia in early 1990s, sold for $12 each, a price virtually unheard of at the time.

The most luxurious and choicest product though came about when Hansotia paired 18-year old tobacco with an entire bottle of Louis XIII cognac for each box of 20 cigars, naming the new creation His Majesty’s Reserve. This extremely limited product retails for $15,000 per box, making this collection the most expensive cigar collection ever made.