A new super-efficient and environment friendly solar cell technology just got an added boost from a team of researchers, who successfully used tin instead of lead perovskite in order to harvest light. The non-hazardous tin proved cheaper than lead and is just as good at absorbing sunlight in solar panel cells. The low-cost solar cell could potentially be a breakthrough for solar energy and has been touted as the next big thing in photovoltaics. 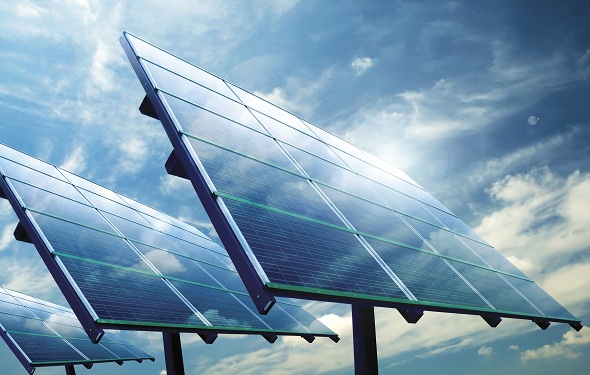 The solar cell technology actually uses crystalline structures called perovskite, whose worthiness in solar cells was noticed back in 2009. Currently, lead is used in the solar cells to convert solar energy to usable energy but this conversion rate has achieved approximately 15 percent efficiency. The new tin cell should be able to produce the same efficiency at a much lower price and possibly the use of it  would even surpass that of lead.

The tin solar cell comes with a sandwich of five layers, with each layer contributing something important. The top layer is electrically conducting glass, which receives sunlight followed by a thin layer of titanium dioxide deposited onto the glass. Together it serves as one of the cells two connecting points or electrodes.

Next, the tin perovskite semiconductor that absorbs the sunlight is deposited. This is done in a glove box that is filled with nitrogen gas as the oxygen in the surrounding air can destroy the semiconductor. On top of that the transport layer is added, which is necessary to close the electrical circuit and obtain a functional cell. This layer also is deposited in the glove box. The solar cell is then sealed and is ready for outside-the-box assembly. The whole device, with all its five layers is about one to two microns thick.

The material was developed, synthesized and analyzed by Mercouri G. Kanatzidis, an inorganic chemist with expertise in dealing with tin. The solar cell was engineered with the help of non scientist Robert P. H. Chang.

The tin-based pervoskite plays an important role of an absorber of sunlight that is clubbed between two electric charge transport layers for conducting electricity. Their solid-state tin solar cell has an efficiency of less than 6 percent, which is a very good starting point, Kanatzidis said.

Two factors that make the material special are, its capacity to absorb most of the visible light spectrum and the perovskite salt can be dissolved, upon the removal of the solvent it can be easily reformed without heating.

However, the new technology breakthrough is just a possibility and not a guarantee yet. The technology will have to be established outside the lab, at a commercial manufacturing scale which is affordable as well as durable. Solar energy is the only sustainable energy that is available in plenty.   Using it in an efficient way could potentially help expand the use of solar energy that could possibly enhance the standard of living and also preserve the environment.