As a part of an initiative to revive parts of the coast hit by Hurricane Sandy in 2012, BIG and Dutch firm ‘One Architecture’ co-developed the Big U Scheme, a socially sustainable flood defense system for New York city.

Internationally acclaimed Danish studio Bjarke Ingels Group (BIG) was built on one powerful notion: to be the key driver in the evolutionary process of the society. BIG’s architecture is infused with radical concepts such as hedonistic sustainability, vertical suburbia and utopian pragmatism. A realistic utopian architecture that places creating socially, economically and environmentally ideal structure as a practical objective and this philosophy has sent BIG sky-high in the world of architecture. From a power-station with a ski slope to a lush wind-powered resort community, and now a flood barrier disguised as a park, there is nothing Bjarke Ingels Group cannot do. 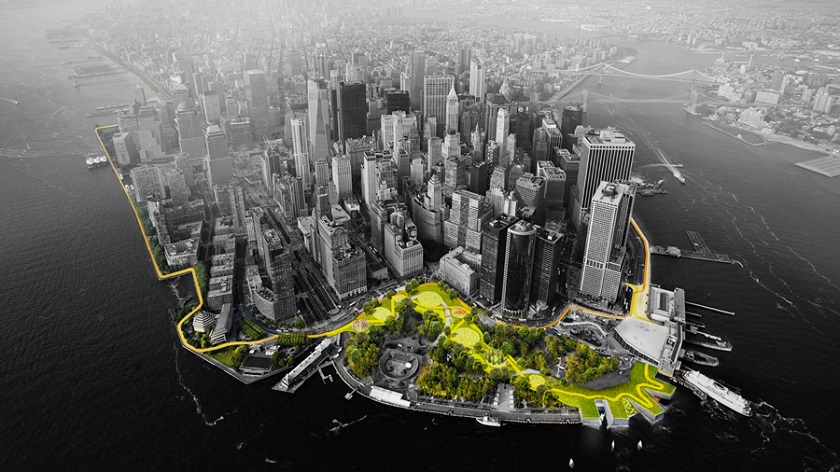 BIG and Dutch Firm One Architecture has been granted $335 million from federal funds as a part of the project to upgrade Lower Manhattan’s storm defenses. Dubbed as the Big U project, is one of the six winners in the Rebuild by Design initiative to restore parts of the U.S. that were hit by Hurricane Sandy. The Big U will establish the waterfront in the Big Apple as a valuable and appealing public zone, with plenty of social, environmental and economic advantages, apart from protecting the heart of the city and its subways.

The Big Apple, Bjarke, and the Big U

A much more extensive part of the project designed by combined efforts by both the firms, the ‘Big U’, is the ultimate shape, the barrier would assume. The Big U scheme is a protective ribbon that will be wrapping a ceaseless 10-mile from 57th Street on the West Side to all the way down south around the battery to 42nd Street on the Lower East Side protecting buildings from torrential floods and storm surges.

The first phase of the Big U project i.e. The Bridging Berm was chosen to safeguard the Lower East Side and the East Village since those were the regions first hit during the Superstorm Sandy and are considered highly vulnerable to storm surges. Both the regions witnessed a major Con Edison substation fire, which led to a day-long power outage, and floodwaters so high that they streamed from the East River all way down to First Avenue.

The Bridging Berm will be planted with a collection of salt-tolerant flora – resilient trees, shrubs and perennials, and will be endowed with public spaces and viewpoints where people can farm, sunbathe, eat and engage with world-class gardens. The massive battery berm will also serve as a route into the East River Park.

A Maritime museum will be constructed where the coast guard building stands today. The museum will be more of an environmental education facility that will feature a “reverse aquarium”, which will enable visitors to observe tidal variations and rises in the sea level.

Anna Domanska
Anna Domanska is an Industry Leaders Magazine author possessing wide-range of knowledge for Business News. She is an avid reader and writer of Business and CEO Magazines and a rigorous follower of Business Leaders.
« Samsung Announces Gear Fit 2 Wristband, Features and Details
This 3D Printed Case can Easily Load Android onto an iPhone 6 Plus »
Leave a Comment
Close

After the deal is finalized, VMware shareholders will elect to receive either $142.50 in cash or 0.252 Broadcom stock for each VMware share. Under the deal, Broadcom will also take
10 hours ago

Sweeney adds, “The problem here is a classic monopoly tie. You start with hardware. Apple makes smartphones and they profit from their smartphones — and they deserve to. But th
14 hours ago

The New York Post reported that the Bolt layoff will see restructuring across US, Canada and Europe. They expect that roughly one-third of the entire workforce will be impacted by
14 hours ago