Eurozone Manufacturing slips while Asia is on a roll.

Final Week of 2011, Stocks Expected to be at a Standstill 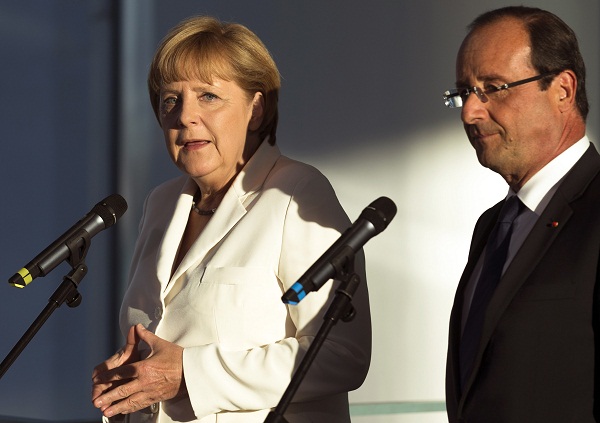 The leaders of France and Germany have made it clear to Athens that it should not be too hopeful about getting leeway with respect to its Greece bailout agreement unless it agrees to maintain the tough Greece reform targets.

Angela Merkel, the German Chancellor, and Francois Hollande, the President of France, have sat down together to talk about the issue regarding Greece being offered further amount of time to make necessary cuts on its spending. Those two powerful personalities are also expected to meet with the Prime Minister of Greece, Antonis Samaras, later in the week.

Samaras has requested some more time for his country to meet necessary terms of Greece reforms that happen to be one of major factors for the continuation of the flow of Greece bailout loans being received by the nation.

The three central donor organizations – the European Commission, the ECB or European Central Bank and the IMF or International Monetary Fund – that are in charge of keeping an eye on the Greece bailout are likely to arrive in Athens sometime in the next month. The constant access enjoyed by Greece to the bailout package is wholly dependent on a satisfactory report from the trio of donor bodies.

Merkel stated that it was essential that they all stood by obligations made and, especially, look out for the publication of the troika report to understand what the trio makes of the situation and what their final verdict happens to be. She added that she would support the country to follow the course laid down by Greece reforms which puts a whole lot of weight on the already overburdened shoulders of citizens of Greece. Hollande, on the other hand, believes that Greece would remain within the Euro Zone but should make obligatory Greece efforts to ensure that the situation advances in its favour.

It seems that the head honchos of the Euro Zone in Brussels are determined to make sure that Greece stays within the Euro Zone.

Jean-Claude Juncker, chief of the Euro Zone, sat down for a meeting with Samaras on Wednesday. The outcome apparently was in Greece’s favour as Juncker decided to keep the option open for a change to the current Greece bailout terms.

The economy of the country which is already heavily indebted continues to plunge Greece in recession. The unending period of recession that continues to disrupt the financial system has resulted in soaring levels of unemployment and poverty in spite of the best Greece efforts.

The country is at present attempting to seal the deal on a package worth a hefty 11.5 billion euros or $14.4 billion of spending cuts over the course of the following two years. The country has also been asked to set up some effective structural and financial Greece reforms in place which includes modifications to the present state of the labour market and a renewed drive for privatization. Steps are required if the country seeks to qualify for the second installment of 33.5 billion euro out of its second Greece bailout which almost comes to 130 billion euro in total.

Greece needs to come up with the necessary amount of funds so that it is able to make repayments on its debt load. A default may lead to the country leaving the euro.

Anna Domanska
Anna Domanska is an Industry Leaders Magazine author possessing wide-range of knowledge for Business News. She is an avid reader and writer of Business and CEO Magazines and a rigorous follower of Business Leaders.
« 800 Aviva jobs at risk due to restructuring
Infrastructure Guarantee planned by the UK to strengthen economy. »
Leave a Comment
Close