Persistent competition is one of the core fundamentals of the tech market scenarios. We’ve come a long way ever since the 90’s when internet was first introduced. It is not vague anymore that business giant executives connect in Twitter scuffles or skirmish for highest Facebook visibility. The arsenal has evolved, even if the competitive essence stays the same. This write-up depicts some greatest business rivalries in technology.

What do these greatest business rivalries have to offer?

If we are to observe how cut-throat these marketers can get, let’s consider the not so infamous, Mcdonals vs. Burger King. Famously put as burger wars, these companies have been hitting out each other through their advertisements and marketing campaign. One eminent commercial is of Burger King brawling McDonald’s for the size of its hamburgers. McDonalds publicized that it will discontinue serving Heinz ketchup in stores because Bernardo Hees, former chief executive of Burger King became the chief executive of the ketchup brand.

In 2015, Uber and Lyft, gained significant attention. Their rivalry for riders and drivers is captivating. While each of the brands having their own significant market shares, rivalry is something to celebrate and learn from and not brush away. Steve Jobs and Bill Gates end up trade contra products yet competed for 35 years to inflict fundamentally dissimilar versions of computing. And a global economy that cannot operate without air travel is enhanced and faster because Airbus and Boeing had to tussle each other every day for forty years. 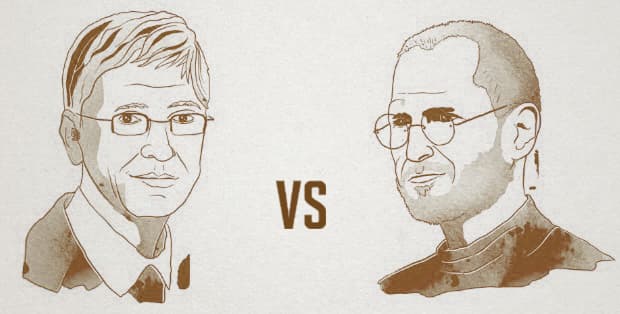 The business rivalries in technology that we’ve seen to materialize are diverse and startling and in great ways rise to reform greater swaths of the market. Greatest rivalries make the greatest legends. This will serve a good reason to read the following rivalry tales of vividness, fabrication, conquest and malfunctions.

Technically Bill Gates wrote the cipher for Microsoft’s former products himself.  Steve Jobs was debonair from the start. Gates implicated dimension and leverage and Jobs seized technique and approach. Gates and Jobs became the divergent poles of the hysterically mounting computing revolution. Above all else though, these contenders understood their industry. None of them received formal training in business and neither had any of them graduated from college. Yet both were innately insightful about making a difference and stick to the antagonism. Microsoft conquered the first two decades of the rivalry, administrating Windows’ rise as the world’s default operating system. Ultimately Apple Inc. welcomed a hundred and fifty million dollar investment from Gates in 1997 when Apple was going through fatality.

SpaceX intends on making reusable rockets that can bring wares to the International Space Station and some day even get humans to Mars. Factually, it has been honoured conventions by NASA to resupply the space station with goods. It has been pugnacious to land a rocket straight so it can be re-usable and was trodden by a rival Blue Origin. Blue Origin had lingered under the radar since alike SpaceX, it has been functioning on landing a rocket upright so it can be reusable and managed to get to the milestone first. Blue Origin’s ultimate goal though, is to transport people into space for space travel. It’s a different kind of project than what SpaceX is working on yet rivalry between the two seems to exist.

Amazon caused a major shudder in Netflix share price in April 2016 by broadcasting that its prime video streaming facility will become a standalone contribution. Nonetheless, Amazon is not the only competitor that alarms Netflix. Competitive pressure is only going to deepen. In that sense, Amazon is a challenger that Netflix has been prepared for. Moreover, currently, Netflix is the market’s most wanted streaming player. The company’s share price climbed by more than 130% in 2015 in merit to enthusiasm for array of hot TV shows and movies. In early 2016, Netflix declared that it has extended to more than 130 countries to push the stock up.

YouTube transformed the internet when it legitimated people anywhere to be the stars and upload their videos. There’s no disagreement with the fact that it has a firm footing on internet video. Two social networks that want to filch spectators away from this Google owned brand are endangering its long supremacy as a video streamer on the internet. Facebook’s days of giving plain status updates are long gone. Its launchpad of auto-play videos has more people tuning into Facebook videos. It is also highlighting its live video feature by modifying the newsfeed algorithm so the timeline more like a Television than a news bulletin. The speedily growing entrant to YouTube and Facebook is Snapchat. It is making easier for people to capture and post videos to each other. While YouTube is a public platform, Facebook and Snapchat are minting on friends sharing their own lives with each other.

Christy Gren
Christy Gren is an Industry Specialist Reporter at Industry Leaders Magazine she enjoys writing about Unicorns, Silicon Valley, Startups, Business Leaders and Innovators. Her articles provide an insight about the Power Players in the field of Technology, Auto, Manufacturing, and F&B.
« “Time is Money” – Great Apps for Time Mindfulness
‘Yahoo’ For CEO Marissa Mayer »
Leave a Comment
Close