Mohammed Ali went head to head with Joe Frazier, Bill Gates with Steve Job, for Nikola Tesla there was Thomas Edison, and for Ernest Hemingway, there was William Faulkner. A lot of artists and world leaders greatly benefited from their rivalry with their counterparts. Take a look at one of the greatest business rivalries between Steve Jobs and Bill Gates – the two most influential minds shaped the history of technology. When times were hard they struggled for motivation, yet they were stimulated by the achievements of the other. Competition can energize and motivate people. It makes us work harder and better, and rise to the challenge.

Founded in 1976 and 1975 respectively, Apple and Microsoft are the world’s two most valuable companies. The rivalry between Steve Jobs and Bill Gates has been well documented through the years. In the fall of 1986, when Bill Gates showed up for a meeting at NeXT, Jobs left him waiting in the lobby for an hour, before he greeted the Microsoft co-founder. A few years later, he condemned Microsoft for making “third-rate products.” Gates claimed, “There’s nothing on the iPad I look at and say, ‘Oh, I wish Microsoft had done it’,” in an interview in 2010.

In 2012, Apple was declared the most valuable company in the world. Steve Jobs hadn’t set out to create the most valuable company in the world; his rivalry was with Bill Gates. Jobs and Gates started out at the same age, at the same time, and in similarly humble circumstances. The result: Microsoft went on to create the world’s default OS ‘Windows’, while Apple developed the iPod, iPhone and iPad. 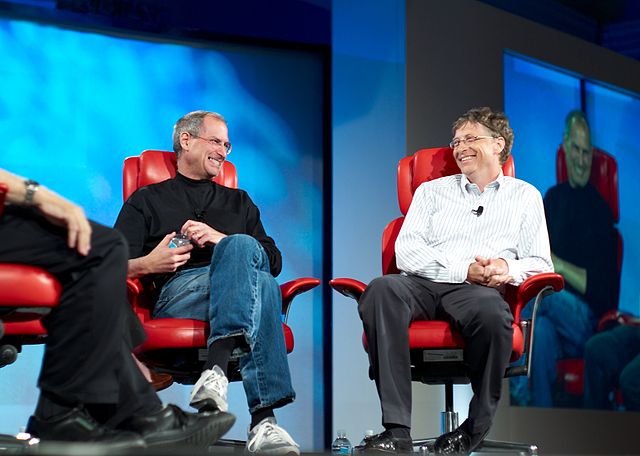 Bill Gates on his rivalry with Steve Jobs: “We made great products, and competition was always a positive thing. There was no forgiveness.”

The two great leaders spent hours reminiscing together in the months before Jobs’ death, with Gates saying “We made great products, and competition was always a positive thing. There was no forgiveness.”

In 1997 Apple was looking at death. Microsoft stepped in to save them by investing $150 million in Apple shares. Why did Bill Gates choose to bail out Apple? We will never know! Perhaps, he needed Steve Jobs’ rivalry. It is widely known that they had great mutual respect and became friendly in the years before Jobs passed away.

It is important to remember that your rivalry doesn’t divert you from your own strengths. Which one is the greater inventor is debatable but both reached the height of their success by trying to be a cut above the other.

Dr. Greg Clydesdale of Massey University wrote in his 2006 analysis of the contribution of rivalry to the success of The Beatles. Moreover, Paul McCartney and John Lennon greatly benefited from their rivalry with one another.

Psychologists say negative feedback, such as taunts and goading from a rival, has the potential to both help and hinder our progress. Sometimes, healthy rivalries can turn into an obsession, especially if your rival consistently does better than you do. In the end, everything depends on how we handle the competition.

Embrace competition just like Steve Jobs and Bill Gates did in their rivalry with one another. The presence of a rival is a good thing. It can make you strive to do better. Whatever you are, monitor your rivals progress with admiration, not with envy.

Anna Domanska
Anna Domanska is an Industry Leaders Magazine author possessing wide-range of knowledge for Business News. She is an avid reader and writer of Business and CEO Magazines and a rigorous follower of Business Leaders.
« McCormick Acquires French’s Mustard, Becomes Condiment King
Reebok Space Boots are Out of the World! »
Leave a Comment
Close