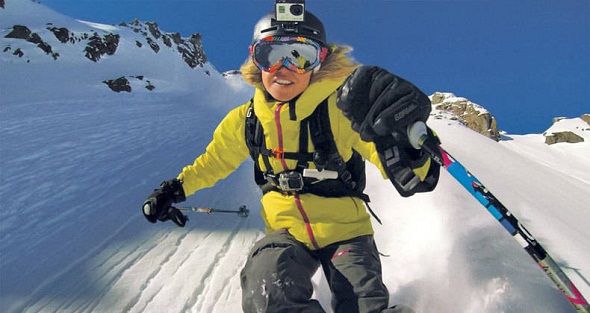 Currently these cameras are available on GoPro’s website and from Best Buy and other large retailers, and they come with a price tag ranging from $200 to $500.

The multi-rotor helicopters are expected to hit the market late next year and will be priced anywhere between $500 and $1,000 depending on features and quality, less than half the price at the low end of the easy-to-fly $1,300 DJI Phantom 2.

The decision to join the nascent consumer drone market would give GoPro the opportunity to make improvements to its offerings, which focus mostly on wearable video cameras for mountaineers, surfers and extreme sports enthusiasts. Other than that, the company gets a chance to sell consumers something other than a camera. Even though GoPro sold nearly 2.4 million cameras this year, up 15 percent from last year, the company is facing growing competition from camera competitors and traditional electronics companies like Sony and Polaroid. For the drone industry, a GoPro drone marks a new splash in a swiftly expanding market.

Currently these cameras are available on GoPro’s website and from Best Buy and other large retailers, and they come with a price tag ranging from $200 to $500.

According to a spokesman for GoPro, recently people have been strapping their cameras to quadcopters to capture jaw-dropping GoPro footage. The spokesman added that GoPro joined hands with the Small UAV Coalition, a drone advocacy group in Washington, beginning this year to understand the policies for using drones and to preserve the rights of its users. GoPro wants to sell consumers both a camera and the vehicle that carries it.

The move comes at a time when drones are becoming an increasing area of interest in both the consumer and enterprise space such as filmmaking, mining and construction. But, the Federal Aviation Administration has prohibited the commercial use of such technology in the U.S., and the agency is expected to bring out new rules for commercial use of drone in December.

Moving into the drone game would pit GoPro against various competitors, such as SZ DJI Technology, the largest manufacturer of consumer drones in the world. Many drone makers have included camera mounts in their latest products, with DJI and Parrot starting to package their custom-developed cameras instead of relying on GoPro’s.

GoPro enthusiasts looking to purchase a new camera this holiday season can get the $250 GoPro HERO3+ Silver edition, which comes with a free $50 Target gift card.