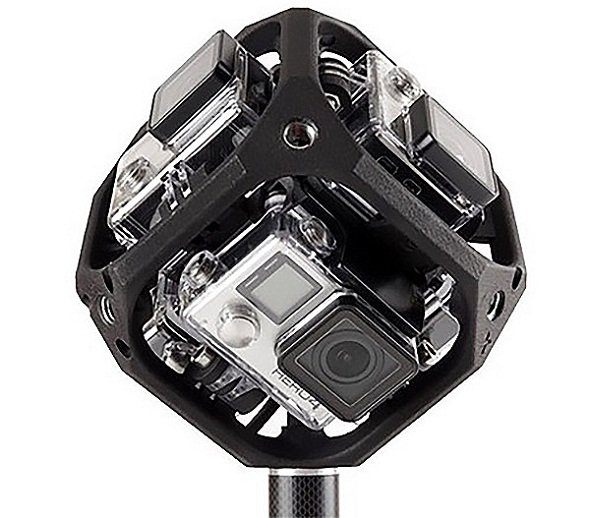 The rig is a sort of a cubical framework that holds six GoPro 4 cameras, which lets users to capture video in all the directions at once.

GoPro CEO, Nick Woodman in an interview revealed a prototype of GoPros-based camera rig that has the ability to capture VR videos, and talked about the company’s foray into the new categories, and also introduced a couple of company’s future products at the conference.

The rig is a sort of a cubical framework that holds six GoPro 4 cameras, which lets users to capture video in all the directions at once. The spherical camera is together priced at about $3000, as said by Woodman, including price for the rig itself.

GoPro’s first Six-Camera Spherical Array is a ball-shaped accessory mount that can accommodate six Hero4 cameras that are fitted in different directions to snap and capture a high-resolution images and videos for virtual reality. The recorded video can be stitched by using YouTube360 or Kolor app- Virtual Reality Software Company, which GoPro acquired in April –to create a unified 6K spherical image. The resulting videos and images can be viewed from on your desktop or smartphones, and also from VR headsets like Google Cardboard, Oculus VR and Microsoft HoloLens.

When users view resutling videos on a smartphone, they can physically turn their head around to record videos in any direction or angel they want. While on a computer’s browser, users can use cursor to steal different views.

Today, Oculus CEO, Brendan Iribe told the mass, which were present at the Code conference that VR would need more video content to be more successful, and that’s the market, GoPro is aiming to achieve for.

Woodman expects the market for this rig to be mainly for prosumers and professionals, who wants to create 3-D videos for using it in Virtual reality, just like as the Oculus VR. He said that the company doesn’t thinks that average consumers will purchase 6 GoPros, and a spherical mounting rig and go out, and capture spherical videos.

Woodman said that the spherical array will go on sale in the second half of this year. The product that was unveiled at the Code Conference was only a prototype, and the final product would be quite more different than the recent one. He stated further that the company is soon going to release a quadcopter with a camera by the second half of the year.

Christy Gren
Christy Gren is an Industry Specialist Reporter at Industry Leaders Magazine she enjoys writing about Unicorns, Silicon Valley, Startups, Business Leaders and Innovators. Her articles provide an insight about the Power Players in the field of Technology, Auto, Manufacturing, and F&B.
« Classmate, FTD agree to pay $11 MN for the settlement of deceptive ads and billing practices
After Tesla, Ford is opening up its electric vehicle patents for free to competitors »
Leave a Comment
Close