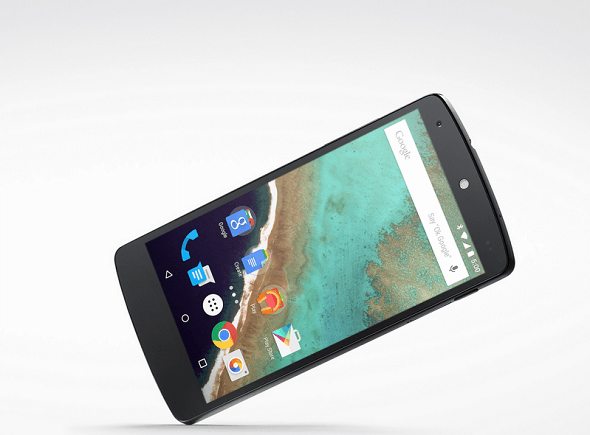 The arrival of this year’s Nexus 5 has been widely speculated and closely followed in the past few months. Google’s Nexus 6 may soon be replaced by two new Nexus smartphones.

Google’s new Nexus handset has been leaked online, revealing features that will be available on the back panel of the device. The handset, built by LG, is expected to be released later this year. This latest leaked picture is allegedly LG’s third Nexus handset.

The leaked photo that has hit the web shows a flagship with a distinct NOT FOR SALE sticker at the back. The back plate is white and comes with the familiar Nexus branding as well. It also has a bigger lens and flash. Google has been known to launch smartphones with their own names. However, this time around, the company seems to have opted to revamp Nexus 5.

The device also sports a LG logo. A protruding rear camera and a fingerprint sensor are also seen at the back of the smartphone. Nexus 5 is said to be available in 5.7 and 5.2 versions. Two different companies will handle the variants. The 5.7 version will be made by Huawei, while the 5.2 version will be built by LG. The leaked image shows a final or near-final design of Google and its manufacturing partners may have in store for the next line of Nexus devices.

The LG Nexus 5 2015 measures 146.9 x 72.9 x 8/9.8 mm and is expected to have either a Qualcomm Snapdragon 808 SoC or a newer Qualcomm Snapdragon 620 CPU. This could be coupled with 3GB RAM along with 32/64GB storage options. The device will have a 13-megapixel rear camera and a 4-megapixel front camera for selfies. The battery life is believed to match those that latest flagships have or exceed their offerings. Overall it might be above 3,000mAh.

The Google Nexus line of devices includes handsets made by third-party manufacturers under the Google branding. As opposed to most other Android-based handsets, the Nexus line runs the standard version of Google’s latest Android operating system. Each year, Google selects the manufacturers that will design and build the latest Nexus handsets. A host of manufacturers, including LG, Motorola, and HTC, have developed Nexus phones.