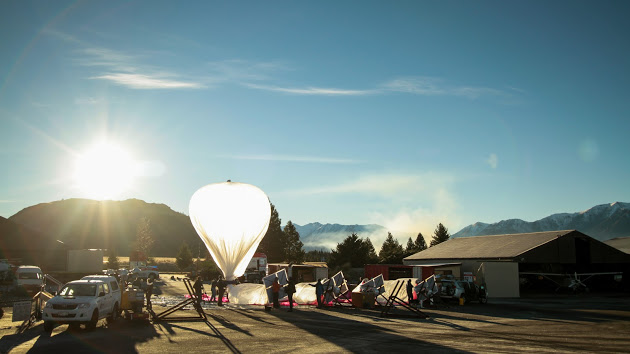 Google’s Project Loon is one step closer to taking flight. In the next phase of their mission, the Internet-beaming balloons are ready to deliver online access in remote parts of Indonesia.

Alphabet, the new parent company of Google, confirmed Wednesday that it has teamed up with three of Indonesia’s biggest telecommunications companies, Indosat, Telkomsel and XL Axiatato to expand Internet access to some of the country’s 17,000 islands.

The solar-powered balloons will be hovering at 16,000 feet (5,000 meters) in the air to deliver Internet access through radio frequency signals to antennae connected to buildings on the ground. The balloons make use of algorithms to figure out the best winds to carry them along their charted course. About 250 million people live in Indonesia, although only 42 million have internet access, according to the CIA’s estimates.

Though the project is still being funded mainly by the revenue generated by Google from digital advertising, it recently became part of an independent lab called X that is operated by Google’s new parent company, Alphabet Inc.

Project Loon is still in the testing phase, hence there is still no estimate when it will begin selling the Internet service to households and businesses within the range of the balloons. The wireless service providers in Indonesia will provide Internet access to people, where there the number of mobile phones about 319 million outnumber people. However, most of those phones do not have The internet because users can’t afford data plans, or more frequently, live in remote areas or in the rocky terrains where it’s unsuitable or too expensive to install the equipment need to deliver high-speed Internet access.

If Project Loon takes off as planned, it will deploy hundreds of balloons that serve as cell towers in the sky, invisible to the naked eye. To pull it off, the project’s engineers must ensure that as one balloon drifts out of a targeted territory’s Internet-receiving range, another one will float in to take its place.

The Indonesian expansion comes after comprehensive testing in New Zealand, Australia and remote areas in California and Brazil. Indonesia’s sheer size and landscape make it Project Loon’s most ambitious step yet. Project Loon eventually wants to dispatch its balloons to other remote regions in the world, ranging from small villages in Africa to the woods of California.

According to Google co-founder Sergey Brin, Project Loon could eventually create millions of jobs around the world to raise the standard of living for the now- poverty stricken people as they are able to go online and educate themselves and make new connections.

Christy Gren
Christy Gren is an Industry Specialist Reporter at Industry Leaders Magazine she enjoys writing about Unicorns, Silicon Valley, Startups, Business Leaders and Innovators. Her articles provide an insight about the Power Players in the field of Technology, Auto, Manufacturing, and F&B.
« Toshiba trades its Image Sensor Business Assets with Sony
Google’s “Everything as One” approach leads to merger of Android and Chrome OS »
Leave a Comment
Close