Google recently launched a referral program under which users will be asked to refer its apps and services to new users and businesses and for each successful sign-up Google will pay $15.

Google has apparently introduced this referral program because many of its existing customers joined after learning about Google apps from their own business partners, family and friends. 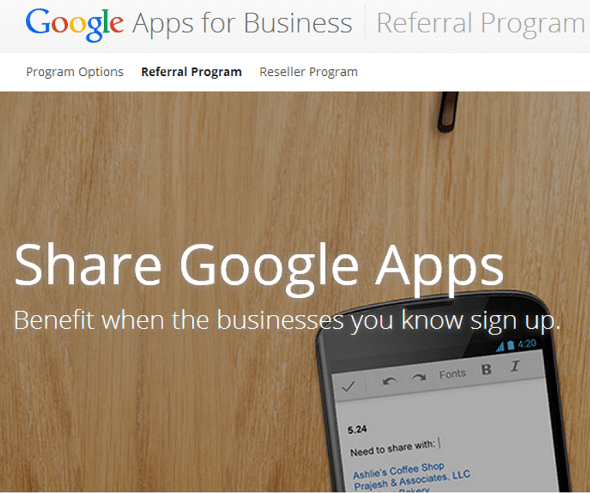 Google allows users to refer unlimited number of people but the $15 per user bonus will only be paid up to the company’s first 100 users who have already paid for the service for at least 120 days.

Prajesh Parekh representing the Google Apps marketing team notes in the blog post that the company was launching the Google Apps Referral Program to help continue the momentum. The referral program would make it easy to share Google Apps with friends and family and show them how they too can use these tools at work, he added.

Under the Google Apps Referral Program, Google allows users to refer unlimited number of people but the $15 per user bonus will only be paid up to the company’s first 100 users who have already paid for the service for at least 120 days.

The Google Apps Referral Program is currently available to users in the United States and Canada and there is no information on the program becoming available in other markets. To participate in the Google Apps Referral Program users will need to update their name and email address on the registration page. Users will also need to provide the company with their valid taxpayer ID number as well as bank account details so that they can receive direct deposits of the reward bonus. Once the registration process is complete, Google will send them a unique referral link to the registered email address so users can share it with their network of friends, family and businesses. To simplify the process, Google even has predefined templates that can be added in an email.

Anna Domanska
Anna Domanska is an Industry Leaders Magazine author possessing wide-range of knowledge for Business News. She is an avid reader and writer of Business and CEO Magazines and a rigorous follower of Business Leaders.
« Wind Power continues to be a major contributor to the US power mix
California DMV Considers Regulating Driverless Cars »
Leave a Comment
Close