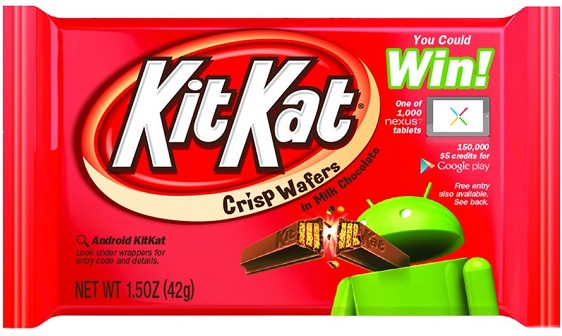 Google has announced that the next version of its Android mobile operating system will be called ‘Android KitKat’, after Nestlé’s popular chocolate bar. As per reports Google apparently reached an agreement with Nestle to use the name — one that’s “not a money-changing-hands kind of deal.”

Google is known for nicknaming its Android mobile operating systems for smartphones and tablets after desserts. Previous major Android releases have been known by generic desserts: Cupcake, Donut, Eclair, Froyo, Gingerbread, Honeycomb, Ice Cream Sandwich and Jelly Bean. It has for the first time chosen a brand name candy for version 4.4, which is expected to launch this fall: Kit Kat, the chocolate candy bar with the “Gimme a Break” jingle. Kit Kat packaging will show Android’s green robot mascot breaking a Kit Kat bar.

There was a long-standing expectation that this fall’s release would be numbered 5.0 and called Key Lime Pie. Given the alphabetical progression of Android code names to date and the arrival of a “K”-based name, it appears that Key Lime Pie is no longer in the running.

“We couldn’t imagine a better name for our Android K release than the tasty chocolate that’s been a favorite among the team since the early days of Android,” said Marc Vanlerberghe, Director of Android Marketing.

To mark the occasion, Google is working with the Hershey Company, which licenses the Kit Kat brand from Nestlé, to distribute co-branded Android Kit Kat candies. The packs will lead consumers to the website android.com/kitkat. Consumers must then enter the code to participate in the promotion. Presumably, personal information will be collected, where they will have the opportunity to win prizes including 1,000 Google Nexus 7 tablets or one of 50,000 £5 credits for Google Play, Google’s online store for apps, games, music, movies, books and more.

Google spokeswoman said in an email that 50 million specially branded Kit Kat bars will be made available in 19 countries, including Australia, Brazil, Germany, India, Japan, Middle Eastern countries, Russia and the United States.

“We’re excited to announce this partnership with Android, the world’s most popular mobile platform, which will help us to enable even more KitKat fans to enjoy their break,” said Patrice Bula, Nestlé’s Head of Marketing.

The promotion begins Sept. 6, which just happens to be a few days before the Sept. 10 media event at which Apple is expected to announce its iPhone 5S and iPhone 5C. The Android KitKat promotion will run through Jan. 31.

Impossible Foods, the makers of the widely popular plant-based burgers, plans to go public with a likely valuation of $10 billion. The vegan burger company was valued at $4 billion
19 hours ago