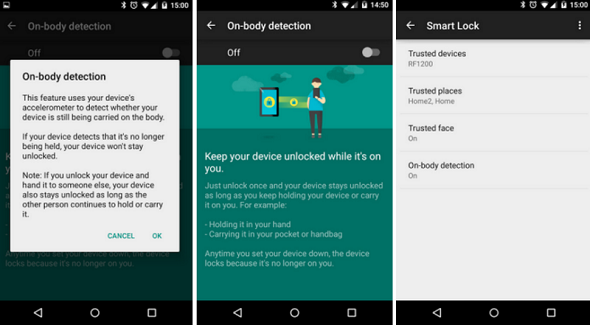 The feature which is under testing is aimed at cutting down the number of times the user has to unlock the phone.

Internet giant Google has announced plans to add two new features, on-body detection and smart lock that allow the smartphone to remain unlocked as long as it is in the user’s possession and lock itself whenever it’s not. The feature which is under testing is aimed at cutting down the number of times the user has to unlock the phone.

The feature essentially uses the accelerometer on the smart phone and judges whether the phone is in use, in the pocket or rested on a surface not being touched.

According to the gizmodo.com web site, the phone needs to be unlocked when user’s first picks it up through whichever method they have set up, such as password or fingerprint. The device will remain unlocked till they are holding it or keep it in the pocket. But once the device is rested on a table or on any other flat surface, the phone will automatically lock itself. Picking it up again will require the user to manually put in the password.

While the on-body detection will free users from repeatedly unlocking their phone as long as it remains in the hand or pocket, it also allows swift and easy access to the device as not having a locking method set up. The feature provides added security and avoids the data being easily stolen by potential thieves, if it was stolen when left it sitting on a table or somewhere else.

However, if the user hands over the phone to someone else while it is unlocked, it will not lock again as the device cannot judge who is using the phone or which pocket it sits in. If the owner of the phone takes out their device from their pocket and immediately passes it over to a friend, they would also be able to bypass the unlocking step. But this can be a security concern, especially if the device is stolen.

It’s just another convenience feature for users to enable them to easily access their device, but it also adds another option to Android’s growing stable of ways to make more convenient for the consumers.

The new feature is specific to Lollipop. The feature was reportedly noticed on a Nexus 4 running Android 5.0.1 and Nexus 6 running Android 5.1., though it’s since been rolled out to most Nexus devices. When the feature becomes available, it can be accessed from Settings – Security – Smart Lock.

Though nothing has been announced yet, Google may gradually roll out this feature to all Lollipop devices.

Most Japanese major companies, which at one time were leaders in consumer electronics, are struggling to find their feet in a world that has moved to digital software. Electronics
9 mins ago