Google rolls out Contributor, a subscription service to remove ads from sites 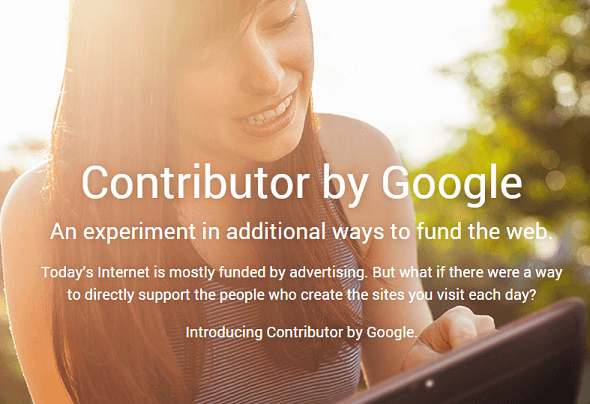 Currently the site is available through a waiting list and is invite-only in the U.S.

Google Inc. announced an initiative Thursday that offers ad-free web browsing to users interested in paying a monthly subscription fee. The crowdfunding tool called Contributor asks users to pay anywhere from $1 to $3 to view the pages. Essentially it’s kind of a subscription service for online publications allowing people to pay to remove ads from participating websites.

“When you visit a participating website, part of your contribution goes to the creators of that site,” Google said at a page launched for those interested in taking part. “As a reminder of your support, you’ll see a thank you message often accompanied by a pixel pattern where you might normally see an ad.”

Subscription once active, visiting those sites will display pixel patterns or thank-you messages instead of the ads they don’t like. Google is launching the service on a trial basis with publishing partners such as Mashable, WikiHow, Imgur, Science Daily, the Onion and Urban Dictionary. Currently the site is available through a waiting list and is invite-only in the U.S.

The internet however runs off advertising revenue, each and every free service a user frequents is paid for by marketing companies buying ad space to not just recover the costs of hosting the site but also to help for profit web hosts turn a profit. It’s why Google and social networks like Facebook value the personal information of their users so much, selling this data to third-party marketers rakes in huge profits for the companies. So the decision to take down its predominant source of income might seem like a risky proposition for the search giant. Subscriptions are managed through a Google user account, and the company makes payment to publishers only when a paying contributor makes a visit, from which Google takes a cut.

This is not the internet giant’s first trial with providing content creators and publishers’ ways to monetize their readership outside of advertising. Google offers Consumer Surveys too, which ask readers to complete a short survey before they can view a page. The company has also created a similar tip jar for YouTube channels that lets viewers donate up to $500.

A vast majority of websites provide free online content but make profits through ads appearing on their pages. Most media companies and newspapers need subscription fees, blocking their content from non-subscribers using paywalls, which then asks them to pay up. Google Contributor is testing waters with microtransactions as a better solution than paywalls and invasive advertising.