Not so long ago, the ‘Godfather of New York Tech’, Fred Wilson predicted that Apple won’t be among the top three companies by 2020, to which Apple Executives paid no heed. Nonetheless this time it is something different. Executives in Apple Campus will be sweating in worry and fury today, for after sitting on the throne for almost three years as the world’s most valuable brand, Apple has been overthrown by none other than titan Google. 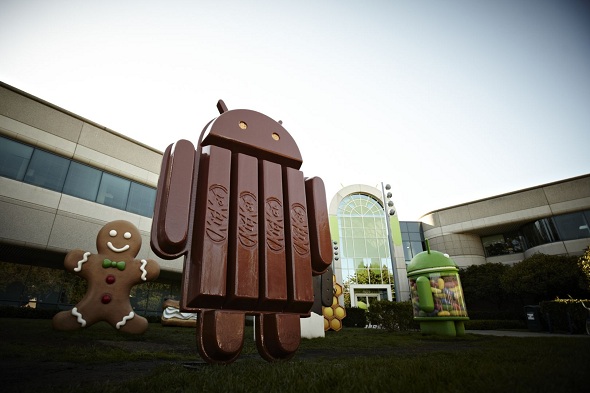 According to a study commissioned by WPP and conducted by Millward Brown Optimor, a research company on this year’s BrandZ Top 100 Most Valuable Global Brands, Google has knocked Apple of its perch as the most valuable global brand and the most valuable technology brand.

The search engine giant Google, which is now worth $159bn dethroned Apple from the number one spot, relegating the Cupertino-based company to second place for the first time in three years.

The BrandZ Top 100 Most Valuable Global Brands is the only ranking which uses views of current and potential buyers of a brand, along with financial data to calculate its brand value.

It is a serious blow for Apple, whose hordes of loyal fans make news all around the world for sleeping in the streets weeks prior, waiting to buy its latest product.

According to Oscar Yuan, Vice President at Millward Brown Optimor, “Apple’s been known for earth-shattering, category-creating, revolutionary products. And I would say just recently Apple’s innovations have been more evolutionary than revolutionary. I think that may have played a little bit in the drop from first to second.” He further added that “Google has been doing just the opposite—they’ve been organizing the world’s information and putting it at your fingertips. Even to things as aggressive as GoogleX—they are making Wi-Fi available globally by putting satellites tied to balloons over the earth. [That kind of innovation] does enormous things for the brand—it’s seen as a making-dreams-come-true-type company, and that certainly helps their brand value. They made a lot of press this year with Google Glass–bringing together the world of apparel with the world of technology—that’s potentially groundbreaking. Google continues to deliver on bringing to consumers and the business world things they’ve never seen before and things they’ve never imagined were possible. That shows in their brand value.” 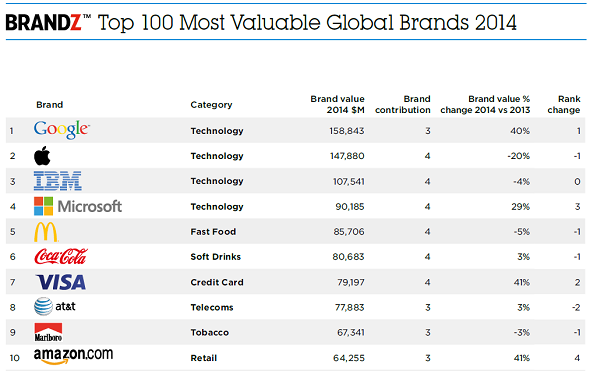 Four more technology companies made it to the top ten list, with IBM maintaining third place with a brand value of $108bn. Microsoft at fourth place with , AT&T at eighth and Amazon at number ten.

Chinese Web Portal Tencent on the other hand made a surprise by appearing at fourteenth place, Facebook at 21st and Samsung at 29th place.

Fast-food chain McDonalds is at No. 5, while open source of happiness Coca-Cola Company at No. 6. Credit Card Company Visa is at No. 7, while Marlboro is at No. 9 just above Amazon.

New entrants in this year’s list included Twitter and LinkedIn, with a brand value of $14bn and $12bn respectively.

Millward Brown study uses a proprietary tool (who secret ingredients are closely guarded) called Optimor to calculate positions of various brands. Data for the study was taken from “150,000 interviews with consumers from around the world.”

The company also revealed that the brand value of the listed brands has increased by 12% since last year. “The recognition that in all markets a small number of consumers account for a large proportion of sales. Loyal consumers are more valuable to a brand than occasional users, a crucial factor when analyzing brand value.” says Millward Brown on Wednesday around its unique approach.

Amazon Inc. plans to set up a pop-up clinic at its Seattle headquarters on January 24 to help vaccinate 2,000 eligible members of the publi...
6 hours ago