Google Project Tango: A Smartphone That Scans the World in 3D

Google has built an Android-based prototype Smartphone and developer kit with advanced 3D sensors from its Advanced Technology Projects (ATAP) hardware which is aimed at developers.  The device comes from an initiative called Project Tango an incredible and novel phone technology project.

The smartphone can learn and map the world surrounding it by detecting the movement of its owner. An attempt from Google to create a robust mapping system that could offer more accurate directions in the future. 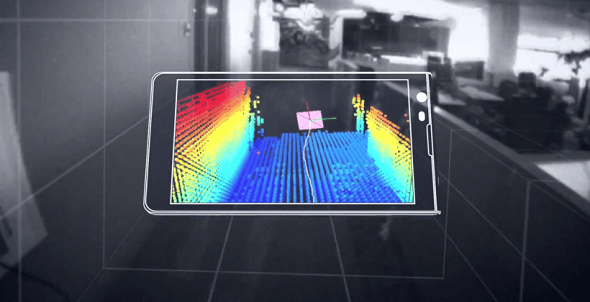 Project Tango is a five inch handset, which uses cameras and depth perception sensors to persistently map out the holder’s physical environment in 3D and match that to the phone’s internal gyroscopic systems and more general location data from GPS.

The data can be used by the phone to build up an accurate picture of its surroundings so that software can combine it with on-screen graphics, or throw the information into a database for later use.

Google along with assistance of studies of computer visual imaging by researchers at universities and the private sector  built Tango. The company claims that it can process the sensor data collected by Tango ten-times faster than anything other device on the market.

Currently, Google has 200 devices which it expects to send out to developers by march 13th.  Developers can thereby build mapping tools, games and new algorithms that will take advantage of the phone’s sensors.

Along with Project Tango, ATAP team is also involved in Project Ara, a modular phone concept that has equally garnered a lot of attention. Google considers ATAP to be a generation of ‘moon-shot tech group’ outside of Google X and its mission is to test advanced mobile technologies. The group is headed by Regina Dugan, former DARPA director who joined Google in 2012.

Elior, the corporate catering company, has acquired the French startup Nestor for an undisclosed amount. Nestor, a Paris, France-based food delivery service, started in 2015 with a
22 hours ago