Electric cars and smart clothing: a reality in 2014

As the tech giant’s $1500 wearable face computer, known as Google Glass finally went on sale to the US general public yesterday, news emerged that Google is now getting into the contact lens game that could one day revolutionize the way we see the world. 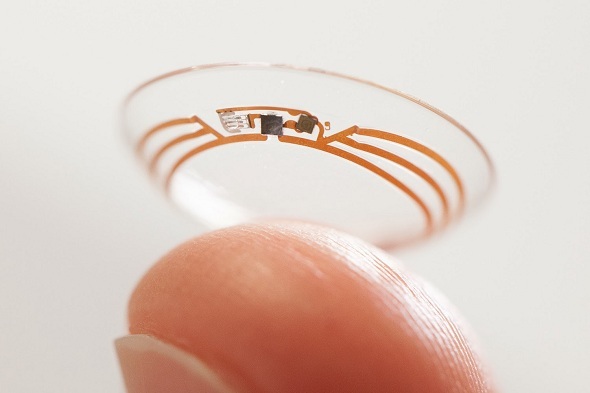 Google has reportedly patented a smart contact lens system that includes built-in cameras. By embedding a camera into a contact lens, users could potentially process different kinds of data that could then be relayed to a connected smartphone.

The patent, which was reported by Patent Bolt, outlines a very thin camera that can be fitted into a contact lens without substantially increasing the thickness of a conventional contact lens. Furthermore, a user will be able to see clearly through the transparent camera that is aligned in such a way that it can track and generate data of an image or of a scene corresponding to the gaze of the wearer, without disturbing the wearer’s view. As the wearer’s gaze shifts, the contact lens will follow that move. The camera in the contact lens could be specifically programmed to gather data from the wearer’s surroundings, including light, colours, specific objects, faces and motion. Users’ eyesight   could also be expanded by the camera by giving them a wider view or also could be used to zoom in, similar to a pair of binoculars.

Moreover, the user does not even need an app on the smartphone or a smart watch to control the camera. Wearers will be able to control a camera lens in their contacts through an advanced system using the owner’s unique blinking patterns.

The smart contact lens with a camera technology will be of significant use especially for the vision impaired. The camera could capture imagery and data that would then be relayed through a voice command on the mobile phone. For instance, when a vehicle is passing by the road they are about to cross the phone could sound off an audible alert after the contact lens’ camera detected the upcoming vehicle.

The patent application was first filed in 2012 by Google and it was published by the US Patent and Trademark Office earlier this month. The technology has to initially go through a series of testing process to get through all safety regulations before it can get to the general public. Companies often file for patents and most of the time; technology detailed in the patents does not make it into the end products that are sold to consumers. But at times, some of them do go on sale.

Google’s smart lens patent filing comes just a few months after the company’s announcement of a prototype contact lens that monitors blood glucose levels. The diabetic lenses were reportedly being developed in Google’s secretive X labs that could help millions of diabetics around the world manage their condition.

GameStop is undergoing a complete revival under new CEO.
20 hours ago