Google Now, the search giant’s powerful automated digital assistant services will now be available for Windows PCs and Macs via the Chrome internet browser. Google’s Chrome team announced the update in a blog post and a tweet that was posted Monday morning. 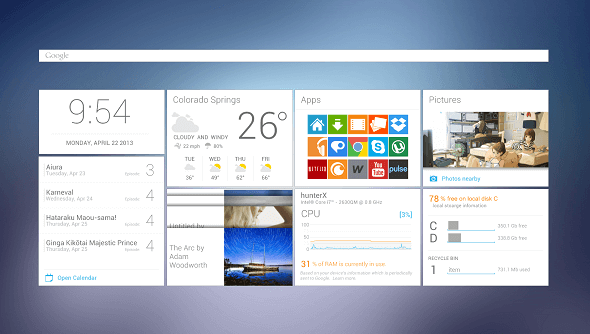 The new update will display informative cards that appear on Android phones on the user’s desktop appear as shown in the picture, offering information on weather, sports and others depending on the user’s browsing and search habits.

By signing into Chrome, the Google Now feature is accessible only with the same account that one uses on their Now account on Android or iOS. The feature can be accessed through the Windows, Mac and Chrome OS versions of the browser. The new update will display informative cards that appear on Android phones on the user’s desktop browser. These cards offer information about weather, sports scores and many other updates depending on the users browsing and search habits. It will also display information related to the users commuting time to home or office, provided the addresses have been saved.  Users find themselves receiving useful information before they need it.  The more information a user actively shares, the more personalized the experience becomes.

Notifications will appear on the lower right (in Windows) under a bell icon quite similar to the larger bell icon used in the top right of Google-based screens to indicate Google+ notifications. Users can  mute notifications and access settings which allow them to select which apps/services can publish notifications.

Interestingly, the desktop and smartphone platforms work in tandem with each other. When a user is searching for some information on the desktop, it reportedly also pops up a card on the smartphone too. Cross-platform features allow users to move smoothly from their smartphones to their computers. The same applies to using a smartphone and receiving desktop notifications.  Browsers who use multiple devices will need to manage the location settings for each of their devices separately. Some cards could be based on the location of the mobile device, so users should check their location settings, which can be edited at any time.

In case the user does not need any particular information, they can just dismiss the card, which helps Google understand what the user finds relevant and when. As of now the service will be available only in English, but Google plans to add other languages soon.

Those users who do not want to use Google Now on desktop, but remain signed-in, can turn it off by opening the notifications centre clicking the bell icon, on the lower right corner of the computer screen for Windows and the upper right corner for Mac PCs and deselecting Google Now within the settings.