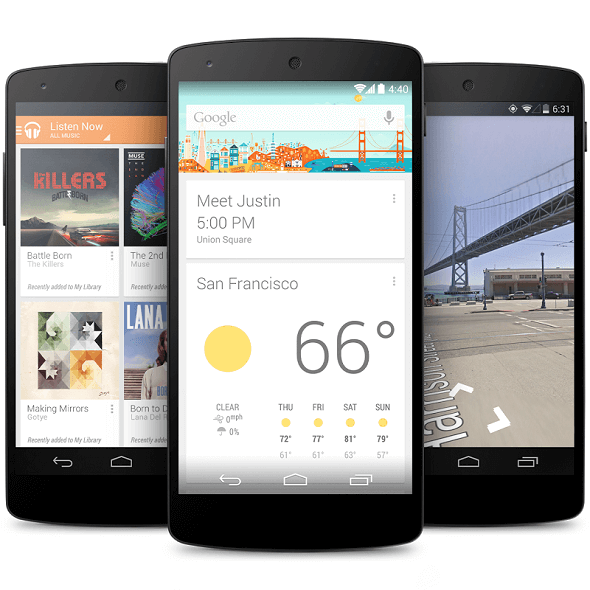 Google’s much-anticipated next Nexus smartphone is set for a launch in October 2014, intensifying competition in the big-size smartphone segment known as phablets.

The device which is code-named Shamu after a killer whale will reportedly feature a 5.9-inch screen, a high-resolution display and will ship alongside a new version of Android. The new phone will be sold under the Nexus brand. Motorola Mobility, which Google is selling to the Lenovo Group, is currently manufacturing the smartphone.

Long rumored specifications of the Nexus 6 include a QHD (2560 x 1440) resolution display and quad-core Snapdragon 805 processor clocked at 2.65GHz, 3GB of RAM and a 3200mAh battery is also expected. Other leaks and rumours have suggested that the Nexus 6 will feature a 13-megapixel rear camera with OIS with a new dual-flash ring configuration; a 2-megapixel front-facing camera and an Adreno 420 GPU and 560dpi screen density.

The new Nexus 6 outperforms the iPhone 6, Galaxy S5, Galaxy Note 3 and HTC One M8 in terms of display quality, processing power and speed. With its 5.9in screen, the device is larger than Apple’s new iPhone 6 Plus, phablet, which has a 5.5in screen and Samsung’s new Galaxy Note series flagship, Note 4 with 5.7in. Even Nexus 6 will cost lower than the new iPhone, according to source familiar with the new device.

Google also plans to unveil a new Android mobile operating system, Android L at the same time along with the new addition to the Nexus line-ups.

The phablet smartphones with screens ranging from five inches or bigger are progressively gaining popularity among users.

Shipments for large-screen smartphones in the global market are expected to rise up to 24% from only 1% three years ago, according to Consultants Strategy Analytics. A number of phone makers have already released their phablets, Apple recently rolled out their 5.5in iPhone 6 Plus and now Google is all set to join the phablet party.

“The phablet wars are in full effect and vendors need any possible edge they can get. Having a large phone will help Google,” added Neil Mawston, a mobile industry analyst at Strategy Analytics. “A lot of people buying their first phones in emerging markets tend to use them as pocket computers and bypass desktops and laptops. Phablets are capable enough to satisfy the needs of such new Internet users,” added Mawston.

Christy Gren
Christy Gren is an Industry Specialist Reporter at Industry Leaders Magazine she enjoys writing about Unicorns, Silicon Valley, Startups, Business Leaders and Innovators. Her articles provide an insight about the Power Players in the field of Technology, Auto, Manufacturing, and F&B.
« Symantec might be the next Silicon Valley company to split up
Apple Supplier GT Advanced to shut down operations in Mesa, Arizona »
Leave a Comment
Close