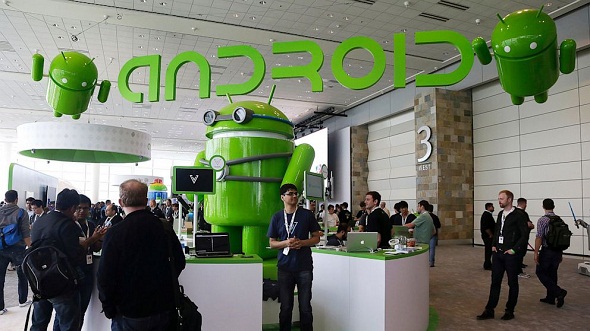 Android booth on the floor at Google I/O in San Francisco.

Google has announced that it will roll out its new Material Design-inspired Maps app soon to fit the style of Android 5.0 Lollipop, bringing some additional features with it as well. The makeover follows those for Android, Chrome OS, the web and other apps such as Google Calendar. Material Design has introduced bright solid colour scheme, new iconography and typography to the app, as well as greater layering.

“Over the next few days, when you open up Google Maps on your Android or iPhone, you’ll be greeted by bright colours and a fresh new design,” This new look is all about creating surfaces and shadows that echo the real world; with Google Maps’ new material feel, layers and buttons come to life so you know just where to touch to get directions, recommendations and imagery.” said Evelyn Kim, Google Maps UX Designer on the company’s UK blog post yesterday.

The search giant is expected to roll out the update over the coming few days and overhaul the existing design to fit in line with Material Design.

One of the best new features is the addition of functionality like direct link to the OpenTable restaurant platform for bookings. The reservation function is consolidated into the Maps app, so instead of switching apps, users can drill their way down to complete the reservation as long as the restaurant is listed with OpenTable. Notably, the new feature will be introduced only in the US region for now. Google had first introduced OpenTable integration in its Search app.

Other than the OpenTable integration, the new Maps app will also include Uber integration features, showing users the estimated pick-up time, price estimates along with conventional driving times and public transit and walking directions. Other public transport journey cost will also be shown alongside. The Uber feature is an extension of Uber integration that Google introduced in a May app update, and will only appear if the user has the Uber app installed in the handset.

Notably, Uber is part of the portfolio of the search engine’s investment arm, Google Ventures. Uber integration with maps gives it a significant advantage over taxis and other forms of private transit. However, Google has not yet taken any step to allow users actually book an Uber ride within the Maps app.