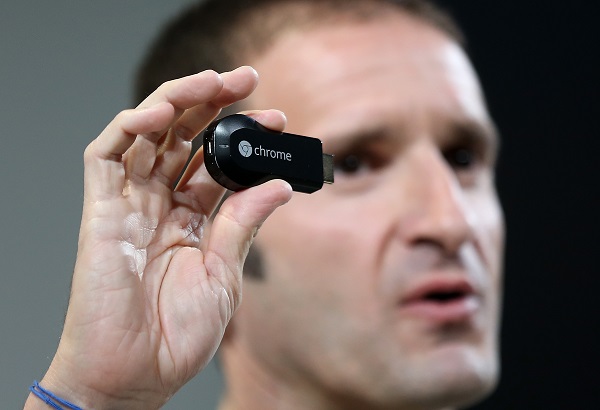 Google recently unveiled Chromecast, a $35, two-inch gadget that will plug into  high-definition TVs and enables people to watch online video, stream music or even show Web pages from computers using the Google Chrome Web browser. Chromecast, is aimed at replacing set-top boxes and can be controlled by both Android and Apple smartphones or computers.

“We are closing the gap between TV and mobile devices,” said Sundar Pichai, Google’s senior vice president for Chrome and Android, in an interview after a news conference in San Francisco. Almost half of all peak Internet traffic in North America comes from YouTube and Netflix, he said, and people want to be able to watch those videos on the big screen.

Unlike other gadgets that play online media on TVs, Chromecast works with laptops, tablets and phones from companies other than Google, so people with both Android and Apple devices, can use this device. When plugged into a TV set, Chromecast will connect both to a home wireless router and to other devices such as smartphones, tablets or laptop computers. Anybody within that radius can then use their smartphone or computer as the “remote control” to select a video or other material directly from the Internet. Google representatives said.

“We will not force you to have the same operating system on all your devices,” said Mario Queiroz,  Google vice president who leads development of Google’s TV products.

Majority of tech companies, including Google offer customers media accessibility only through their services or devices. At present Chromecast shows media from Google’s own properties, YouTube and Play, as well as Netflix. Google Cast allows any software developer to program its mobile apps to work on TVs. The device won’t work with videos from Amazon or Hulu unless the material is being streamed from a laptop using the Chrome browser. Pichai said Google is talking with various companies about creating apps that would work with Chromecast. “I fully expect a lot more partners to join us,” he said.  Apple is unlikely to join Google’s party

Chromecast  also allows people to rely Web sites visible in their browser on their big screen. So users can watch videos or look at photos on the TV screen. But Mr. Pichai said that media companies had the power to block their content from Chromecast, which they did with Google TV.

Google’s previous  attempts to connect TV sets to the Internet has met with little success. The company initially tried to install an operating system called Google TV into sets made by TV manufacturers, but that did not work out. Previously, Google introduced a device called the Nexus Q in hopes of delivering more Internet video to flat-panel TVs. It was dead on arrival.

With the introduction of Chromecast, Google is now negotiating with TV channels for an Internet cable service, in which people would be able to access cable channels in a Web browser. So Chromecast may be the first step in what Google hopes will be a cable alternative. Google is also trying to remove the cords and clunky boxes that accompany most TVs. Chromecast plugs into an HDMI port on a TV, connects to power through a USB cord, and uses Wi-Fi.

In order to attract people to try Chromecast, Google is offering three months of free Netflix service with a purchase of the Internet-streaming stick. That translates to a $24 value, leaving the cost of the device at $11 for those who would have gotten Netflix anyway.