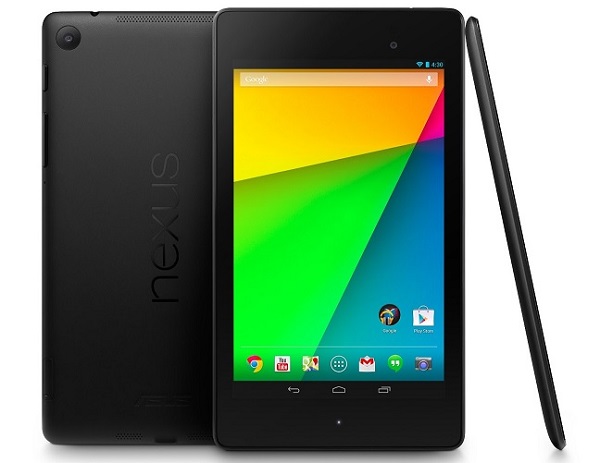 Google along with Asus has formally announced a new Nexus 7 tablet. Some great features of Nexus 7 include thinner and lighter body with full 1080p HD resolution display. This Nexus 7 device has the strongest feature of Android 4.3 Jelly Bean update running on it. The new Google Nexus 7 tablet is significant improvement over the first Nexus 7 in terms of core hardware, camera, weight and mobile operating system entirely.

At the press conference to announce the launch,  Sundar Pichai, who oversees Android and Chrome for Google Inc. said  that Android tablet activations have risen from 10 million last year to 70 million today, and in markets like Japan, Android slabs are outselling their Apple rivals.

Asus has housed a quad-core 1.4GHz Qualcomm Snapdragon S4 processor that almost doubles the computing performance of the old Nexus 7, plus an Adreno 320 400MHz GPU, giving a promised 4x performance boost, along with 2 GB RAM. This is a major change over the NVIDIA Tegra 3 chipset with 1 GB RAM in the Nexus 7 (2012).

The new Nexus 7 tablet comes in two sizes (16GB and 32GB) WiFi models that will be available from 30 July, running 802.11 a/b/g/n. There’s also an LTE model that works with Verizon, AT&T and T-Mobile 4G services via a custom chip that Google has purchased from an unnamed third-party supplier will be available in the future. That hardware means Google will be able to sell the mobile version easily across all US carriers. It will feature dual-band WiFi support which was really needed since even Kindle Fire HD models have dual-band WiFi support

The new Nexus 7 runs  Android 4.3 Jelly Bean update including a 4G LTE version that’s the first hardware to allow 4G reception from a variety of competing carriers. Nexus 7 also features the new Bluetooth 4.0 LE that will work nicely with the Bluetooth Smart support in the Android 4.3 Jelly Bean. Other than that, there is HDMI output for connecting the tablet directly with a HD display. There will be near field communication support as well. The New Nexus 7 tablet also supports wireless charging. Its MicroUSB port also has SlimPort capabilities, meaning that it can connect to an HDMI adapter. It also has several new features such as multi-user restricted profiles, and several features mostly catering to overall performance improvement.

Battery capacity is a claimed nine hours for video and ten hours worth of web use and browsing, with Qi-compatible wireless charging if you want to buy an extra charger. The unit ships with a USB charger in the box, but it works with any micro-USB power cable. However, Google Inc. points out that simply Web browsing or e-reading will make the Nexus 7 last for 10 hours as well.

The new Nexus 7 tablet (2013) has 1.2 megapixel camera in the front for video conferencing and also a new 5 megapixel camera at the back for imaging. It also features SlimPort technology support that allows connecting the tablet to a larger display via HDMI, VGA or DisplayPort connectors.

Google will start selling the Nexus 7 (2013) from next week onwards. Consumers will pay $229 and $269 for the 16GB and 32GB Wi-Fi models respectively, and $349 for the LTE-equipped 32GB version. Sales are restricted to the US at present, but the UK, France, Germany, Spain, Japan, South Korea, and Australia will be able to buy the New Nexus 7 tablet in the coming few weeks. Google Inc., which gets its major share of its revenue from online and mobile advertising, wants the aggressively priced Nexus tablets to be a hit as more users would mean increased exposure for its ads.