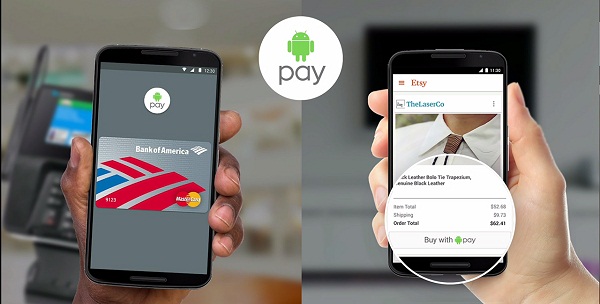 Android Pay will let users store their credit and debit cards on their smartphones, and use their smartphone’s NFC chip to simply tap-and-pay at any location equipped to handle this payment method.

On Thursday, Google announced the official launch of Android Pay, a move to grab a chunk of the growing market for mobile payments.

The search giant announced in a blog post that Android Pay is rolling out at more than one million U.S. locations including big-name brands like Best Buy, McDonald’s, Macy’s, Walgreens, Subway, Whole Foods, Toys R Us, Petco, Sports Authority, Aeropostale and more.

Similar to Apple Pay, Android Pay will let users store their credit and debit cards on their smartphones, and use their smartphone’s NFC chip to simply tap-and-pay at any location equipped to handle this payment method. The mobile payment service will initially be limited to the U.S. and will be rolled out gradually over the next few days, Google said.

Those users who are already using Google Wallet can get Android Pay as an update to their Wallet app. New users will now be able to download Android Pay from the Google Play app store in the coming few days, Pali Bhat, director of product management at Android Pay said in a blog post.

According to Bhat, Android Pay will come pre-installed on all new Android smartphones from T-Mobile, AT&T and Verizon that support NFC – Near Field Communication technology.

To use the mobile payment application, Android smartphone users in the U.S. will have to download and install the app, enter a valid credit or debit card account to it and they are ready to make purchases. Those users who already have a card in Google Wallet or any other app can upload that information to Android Pay.

In order to make payments, users have to unlock the phone, start the application and hold the back of the phone close to a contactless payment terminal that supports Android.

The debit and credit card data used for payments through Android Pay is tokenized. User’s real credit or debit card number isn’t sent with their payment. Instead, Android Pay uses a virtual account number that provides an additional layer of security. When a transaction is completed, the app immediately sends a payment confirmation to users showing the place of the transaction to help them spot suspicious activity, Bhat explained.

Android Pay works with MasterCard, Visa, American Express and Discover. The platform supports major credit cards from a total of nine banks including Wells Fargo, US Bank, Navy Federal Credit Union, PNC, Regions Bank, Bank of America and USAA. Google says Citi Bank, CapitalOne and Wells Fargo will be launching within a few days with more banks to be announced in the coming months.

Later this year, the search giant will consolidate Android Pay into several mobile applications as well so smartphone users will be able make in-app purchases through Android Pay.

This isn’t Google’s first time at the mobile payments space. In 2011, Google released Google Wallet, but the technology has struggled because it didn’t have a large enough network of compatible devices and wireless carriers willing to work with it.

Google held a 4 percent share in the mobile payment market as of November 2014 compared to the 1.7 percent market share acquired by Apple in just a month of its launch of Apple Pay, according to a December 2014 report from investment research firm ITG.

Anna Domanska
Anna Domanska is an Industry Leaders Magazine author possessing wide-range of knowledge for Business News. She is an avid reader and writer of Business and CEO Magazines and a rigorous follower of Business Leaders.
« Goldman Sachs-led thredUp Plans to Take Down eBay
Motorola’s Shatterproof Droid Turbo 2 Smartphone Arriving End of the Year »
Leave a Comment
Close