Gmail’s 425million users account could be about to change. According to leaked screenshots Google is reportedly working on a new user interface for its popular online webmail service that would radically redesign the inbox. With the new overhaul, Gmail could sport a unified design across multiple platforms like desktops, mobile devices and even wearables. 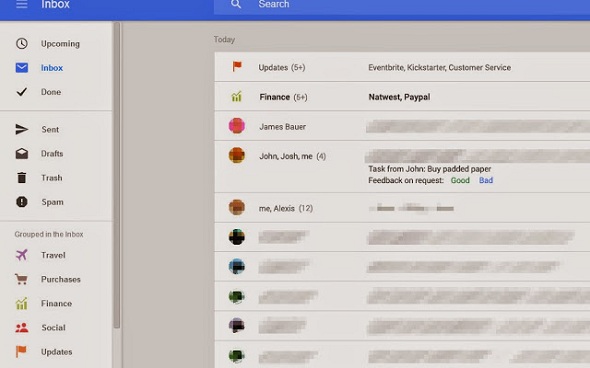 According to reports from tech website geek.com, a selected group of users are already testing an updated version of the web based email.

The new Gmail version will bring changes to the contemporary design of the email service. One major change would be the replacement of the collapsible interface on the left side with a drop down menu that vanishes when it is not in use. That removes lot of the clutter and provides the whole interface more breathing space everywhere on the screen. The other big change would be Google replacing the Stars feature from Gmail in favour of pins similar to Windows 8. All the pinned emails can be set to stay on top of the other mails. On the right side of the screen will sit a collapsible Hangouts interface, along with new activities bubbles. This to-do list can apparently hold message drafts, reminders and much more.

The update also brings UI changes to Hangouts, and adds features like snooze an email, which will push chosen emails to the top of the list at a certain time and date reminding users about their appointments, their do-to list or replying to an email. And also a new feature has been added called Remind Me, which alerts users to correspond to certain emails at a specific time. The new revamped look resembles the mobile app versions of the client and has a cleaner look.

It’s worth noting that Google tests new ideas on a regular basis and many never get released to the general public. On the whole this appears to be a pretty huge reimagining of the popular Gmail service. While there has been no information about an official release date, there is also no guarantee that it will ever roll out to the public or it may be possible that the company might showcase it at the forthcoming Google I/O happening next month.

Considering how crucial email is to the professional lives of many, a pretty drastic redesign of this magnitude could come as a shock to some people, so it’ll be quite interesting to see how this one will be accepted should it ever come to fruition.

Christy Gren
Christy Gren is an Industry Specialist Reporter at Industry Leaders Magazine she enjoys writing about Unicorns, Silicon Valley, Startups, Business Leaders and Innovators. Her articles provide an insight about the Power Players in the field of Technology, Auto, Manufacturing, and F&B.
« The World’s Most Advanced Supercar is here! Undeniably a Masterpiece the BMW i8 Hybrid Supercar comes straight from the future!
Wolfgang Artists Team Set to Beat Architects for the UK Pavilion 2015 Milan World Expo »
Leave a Comment
Close