Google Helpouts service, live help for you from experts 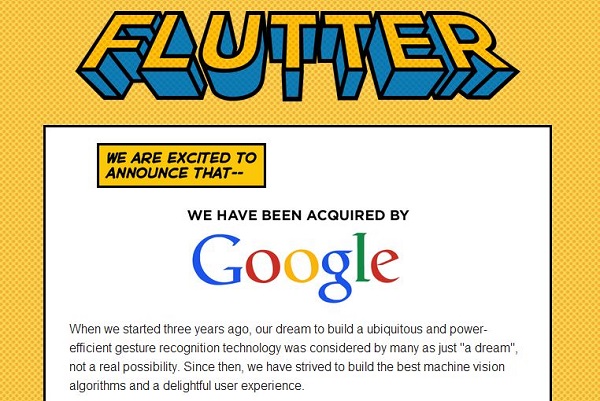 Flutter, known for gesture detection technology, announced that it has been acquired by Google. While the terms of the deal were not disclosed, the deal was speculated to be worth around $40 million (£24 million).

The acquisition has caused speculation that Google Inc., the search engine Giant will integrate the technology in to its wide array of services, as gesture detection technology has become big in recent years.

San Francisco based the Flutter app was launched in 2010, detects simple hand signals via webcam, using them to control apps. The company says its mission is to “build joyful-disruptive products using computer vision — the next frontier in HCI (Human-Computer Interaction) — and change the world forever by making gesture based interaction with computers ubiquitous.”

“Today, we are thrilled to announce that we will be continuing our research at Google,” Writes the Flutter App CEO Navneet Dalal . “We share Google’s passion for 10x thinking, and we’re excited to add their rocket fuel to our journey.”

The Flutter App which is backed by Y Combinator Andreessen Horowitz, New Enterprise Associates, Spring Ventures and Start Fund has raised nearly $1.4 million in its initial phase. The startup specializes in gesture detection technology, which does not require any separate hardware, in fact, it uses the computer’s built-in web cam to control some of the apps with basic hand gestures on Windows and Mac OS X.

The Flutter app already works with popular apps such as Spotify, iTunes, Keynote, VLC Player, Quicktime, Netflix, Youtube and Pandora through a Chrome web browser extension. It’s still unclear what Google Inc., the Search Engine Giant plans to achieve with the acquisition, but considering Google is working vigorously on its Nexus lineup, we might be able to see the acquired technology put in to use in its next smartphone,  Chromebook devices or as an extension for its Google Chrome browser.

Gesture detection technology has also been integrated into Samsung Galaxy S4, which permits taking calls, changing music and browsing through the gallery with hand gestures.

The acquisition can give Google Inc., the search engine giant some muscle to battle against rival technology giant Microsoft, which is a frontrunner in gesture detection technology with its Kinect accessory to the Xbox games console.

“We’re really impressed by the Flutter App team’s ability to design new technology based on cutting-edge research,”  said a  spokesperson from Google’s search engine giant in a statement. “We look forward to supporting and collaborating on their research efforts at Google.”

Users who downloaded the Flutter app for PC, Mac and Chrome can continue using it as normal.

Carrie Ann
Carrie Ann is Editor-in-Chief at Industry Leaders Magazine, based in Las Vegas. Carrie covers technology, trends, marketing, brands, productivity, and leadership. When she isn’t writing she prefers reading. She loves reading books and articles on business, economics, corporate law, luxury products, artificial intelligence, and latest technology. She’s keen on political discussions and shares an undying passion for gadgets. Follow Carrie Ann on Twitter, Facebook
« What next after US Government shutdown? When does the Shutdown end?
JAL – Airbus deal to be one of the Biggest Aircraft deal »
Leave a Comment
Close