On Thursday, Google revealed that it hopes to utilize small unmanned aircraft as a quicker and cheaper alternative to drivers to deliver goods. In the video above, Google shows a drone making its first successful delivery of a bunch of Cherry Ripe chocolate bars on Aug. 13.

“It’s years from a product, but it is sort of the first prototype that we want to stand behind,” said Nicholas Roy, founder of Project Wing. 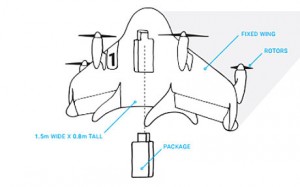 The team from Google X, over the next few days also delivered farmer-friendly goods ranging from dog treats, cattle vaccines, water, first-aid kits, to radios to people waiting below. The items listed above were selected by GoogleX “based on several conversations with local people – ranging from emergency services teams to fire crews to farmers – about how aerial delivery might help them in their jobs. Over the course of the week, the team ran more than 30 successful delivery flights. We are now back in California reviewing what we’ve learned.”

The unmanned aircraft can hover up to 60 meters above “common obstacles” while flying, to avoid collision with power lines, trees or houses resulting into injuries by its fast-spinning propellers. According to an illustration produced by Google, the unmanned aircraft is 0.8 meters long and has a wingspan of 1.5 meters, with a tiny compartment in its belly to transport goods and has a maximum payload of 22 pounds. 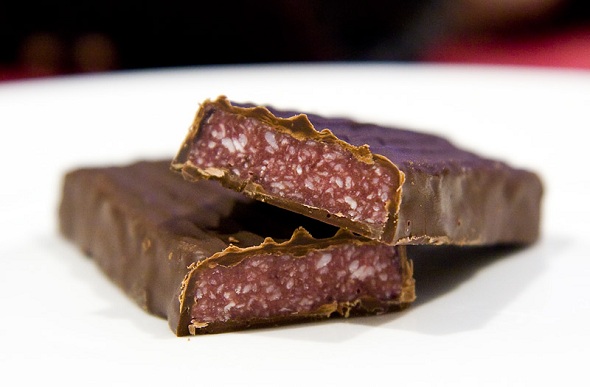 In the video above, Google shows a drone making its first successful delivery of a bunch of Cherry Ripe chocolate bars on Aug. 13.

The drone uses location technology, to determine where it needs to deliver goods and has the ability to sense when a package is retrieved that it needs to take back its reel used to deliver the goods and take off. It is yet not clear whether it can work efficiently in high winds or rainy weather.

Apart from Google’s plans to make everyday life easier, it eventually want to use the drone to offer disaster relief in remote areas which are difficult to get to using conventional means. “Think of the mom stuck at home with two sick kids, the hiker who’s met a poisonous snake, or the farmer out in the field with a sick animal,” Google X said. It will be focusing on key four areas over the course of next few years:

Google eventually plans to multiple vehicles in order to reach consumer’s delivery demands. “Over time there will be many different vehicle types and shapes: what you want to deliver and where and why will determine what vehicle you want to use.”

The Federal Aviation Administration has authorized a series of UAS test for commercial use at six test sites. Google is yet to address FAA concerns or mention if it will be doing any testing in the United States.