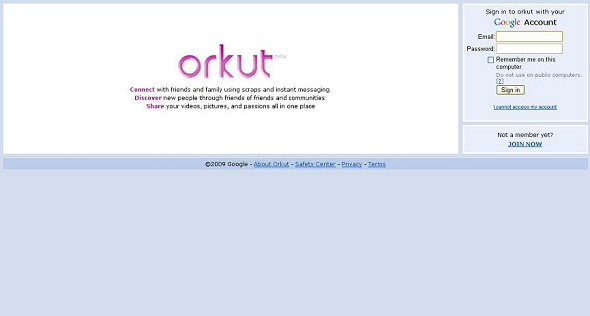 Do users even use Orkut anymore?

With Orkut not managing significant numbers, it has decided to bow out of the scenario.

Orkut, Google’s first foray into social networking, will be finally shutting down after September. The service, which was very popular in India and Brazil did not do so well in other parts of the world, thanks to the bludgeoning presence of Facebook and Twitter.

Orkut, which was started ten years ago popularised posts or scraps between friends and forged connections. According to its website, around 50.6 per cent of Orkut users were from Brazil followed by 20.44 per cent that came from India, US had around17.78 per cent and Pakistan accounted for nearly 0.86 per cent users.

Google strategy would now be to focus more on its other social networking ventures such as YouTube, Blogger, and Google+ services that have proven to be more popular. The last decade has seen these platforms ascend to amazing response. The progress of these social media also has played a huge role in overlooking the importance of Orkut.

“Over the past decade, YouTube, Blogger and Google+ have taken off, with communities springing up in every corner of the world. Because the growth of these communities has outpaced Orkut’s growth, we’ve decided to bid Orkut farewell,” Google said in a post on the Orkut blog.

Significant is the fact that Orkut was founded in 2004, the same year when Facebook was launched. Facebook has now grown to be the world’s largest social network with 1.28 billion users. According to research firm comScore, Facebook outpaced Orkut as the topmost social media space in India with 20.9 million visitors in July 2010 compared to Orkut’s 16 per cent growth with 19.9 million visitors. With Orkut not managing significant numbers, it has decided to bow out of the scenario.

In a blog post, Google noted that starting Monday, creating a new Orkut profile will not be a possibility and until September end, people can still use Orkut as it stands. This period will give the community time to manage the transition. The search engine giant noted that, though Orkut service is going away, all of those communities will live on. The company is preserving an archive of all public communities, which will be available online beginning September 30. Users will also be able to export their Orkut profile, community posts and scraps, testimonials and photo albums using Google Takeout, which will be available until September 2016. Those user’s who do not want their posts or name to be added in the community archive can remove Orkut permanently from Google account.

Anna Domanska
Anna Domanska is an Industry Leaders Magazine author possessing wide-range of knowledge for Business News. She is an avid reader and writer of Business and CEO Magazines and a rigorous follower of Business Leaders.
« Facebook’s Psychological Experiment Secretly Manipulated News Feeds of Users in 2012
Hackers Target Energy Companies in US and Europe, Raises Sabotage Fears »
Leave a Comment
Close