Google wants to be truly powered by 100% renewable energy

Alphabet Inc. has inked a 10-year deal in Europe to buy the largest solar park in The Netherlands to power a recently opened data center housing thousands of servers. It is a part of the search engine giant’s plan to power Google data centers with renewable energy sources such as wind and solar. With Google investing millions in renewable facilities, the prices for wind and solar energy are also expected to fall considerably.

No financial details of Alphabet’s deal with Eneco were disclosed.

Eneco will supply renewable energy for months, may be even years.

The Netherlands, unlike many European nations, lags behind European energy goals. According to Eurostat, it is the last out of all EU nations when it comes to making renewable energy progress. It will take several years before it reaches the goal of running on 100% renewable energy. This year, the nation made an investment of 12 billion euros in offshore windmill farms. 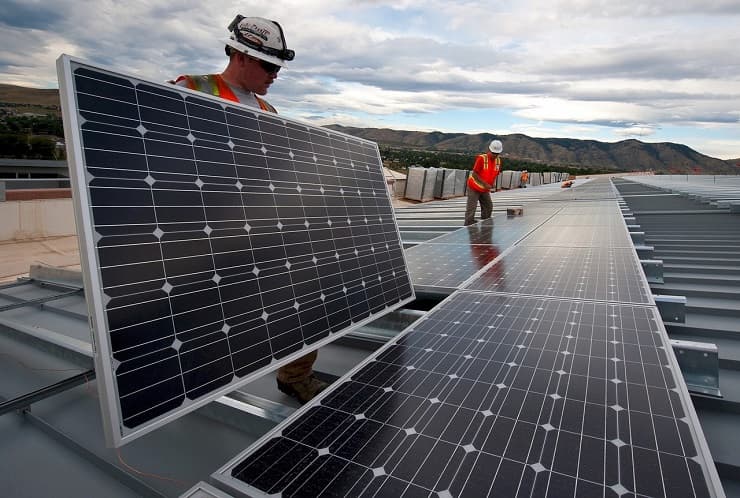 Google data centers and the offices for its 60,000 employees will be 100% powered by renewable energy by the end of 2017.

It’s not just EU nations balling up in the race to see who can be the greenest. Tesla seems to be leading the renewable energy race, with its Gigafactories to be 100% renewable energy powered. It is building a large solar energy plant on the island of Kauai in Hawaii to power its auto plants. Earlier this year, Apple announced a $1.5 billion green bond to further its renewable energy goals. It is the largest green bond in the U.S. corporate history. As of 2017, ninety six percent of its worldwide energy comes from renewable energy sources. In 2016, Facebook announced it will invest $500 million to build a new data center in Fort Worth, Texas. The data center will be 100% powered by renewable energy, all thanks to a very lucrative collaboration with Citigroup Energy, Alterra Power Corporation and Starwood Energy Group. Apple, Facebook and Google seem to be close to reaching the 100% goal.

The solar part and Google data center are located in Eemshaven, The Netherlands. The solar park consists of 123 thousand solar panels on 30 hectares of land. It generates 27 gigawatt hours of solar power annually, which is more than enough to power 7,000 homes for an entire year.

Despite the high-output, the solar park’s energy is a fraction of what the new Google data center will use. Google is also planning a $1.14 billion data center in the Grand Duchy of Luxembourg. For all we know, the data center will be built on a 25 hectares site. Google operates four data centers in Europe, including two in Ireland, and one each in Belgium, Finland. The company also bought 73.2 hectares in Denmark for $9.9 million.

Google is an active members of the Renewable Energy Buyers Alliance. It aims to contribute 60gigawatts of clean energy capacity to the grid by 2025.

Google data centers and the offices for its 60,000 employees will be 100% powered by renewable energy by the end of 2017. The target took five years to reach, set in 2012. A lot of time was spent in negotiating power purchase agreements. This does not mean that 100% renewable energy comes directly from wind and solar farms. Google spends a lot of amount purchasing from renewable sources.

The search engine giant is already the world’s biggest corporate buyer of renewable energy. In 2016, it bought 44 percent of its power from wind and solar farms. Without wasting any time, it is now contemplating about investing in nuclear power, too. The safety implications of nuclear power are much more dramatic than renewables. This doesn’t mean Google will rule out signing nuclear projects if it meets its goals of safety and low price.