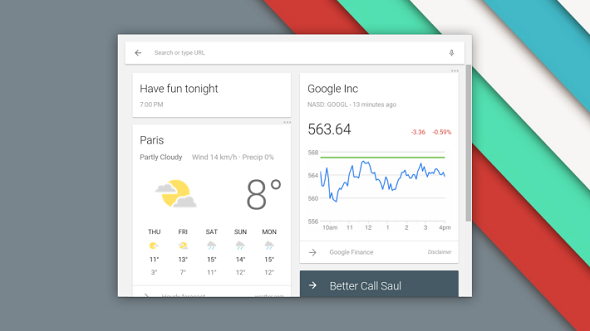 The Google Now support will show cards below the displayed apps, just like the feature which appears in Android smartphones and tablets.

In an announcement made last week, technology giant Google said that they are bringing the ‘Google Now’ notification card into the Chrome operating system.

The move is targeted at developing a more Android-like experience for the users of Google Chromebook laptops and Chromebox. Dubbed as the Chrome Launcher 2.0, the new update is available for users on the Chrome OS beta channel.

In a statement Google said that the look and feel of the user interface has been immensely modified. When users want to view installed apps, instead of the small one on the previous launcher; it opens up larger window in the screens center, similar to Google Chrome’s new tab menu. The Google Now Launcher 2.0 includes a Google search box, which contains the user`s four most recently used apps underneath the search box, and an option to click a button that reveals all installed apps. According to the search giant, their logo will appear on the top of the search box. The Google Now support will show cards below the displayed apps, just like the feature which appears in Android smartphones and tablets.

Tech experts say that the new launcher will add an additional step for the users to open an app, which is not attached to the bottom shelf. It was also confirmed that Google Now provides cards, or small windows which contain various information like weather, traffic, headlines and sports scores. This independent platform also works alongside Google’s email service, Gmail. With this connection, cards like events, flight schedule, appointment information and others will also appear on the main dashboard of the users.

Apart from the key changes, the update will mark the debut of Google’s Material Design paradigm to systematize the appearance of its services and software’s. Google announced that the Chrome OS launcher will be able to open password-protected ZIP files, and will put the Material Design interface on top of the files app. Based on where the user is located, they will be able to program their machines’ time zone automatically.

Senior Google executive Francois Beaufort said that the Material Design would soon arrive to more pockets of the Chrome OS Beta. The Chrome OS Beta update, which includes the Google Now launcher, will come next week, he added.

However, there are certain drawbacks, such as the fact that it will be a little harder to open apps on Chrome, but as compared to all the other changes and improvements, this may not matter too much.

In order to try the beta version, users can head to Settings and then click About Chrome OS. They will then be required to click More Info and hit the Change channel button. After clicking the button the device will restart and then the Check for and apply updates button needs to be clicked. If users stick to the stable channel, the beta features normally take about a month to make their way over.