With Google continuing its acquisition spree of Android app developers, it’s now time to add another name to the list of companies that have been acquired by the company. 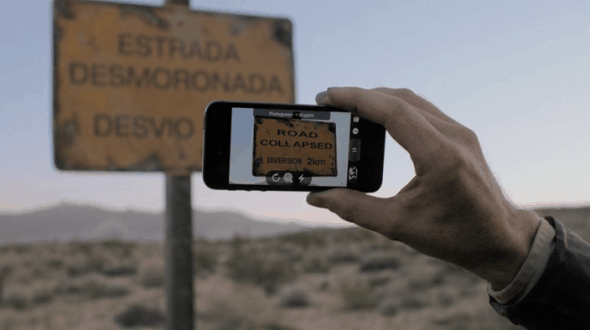 On Friday, the search giant revealed that it has acquired Quest Visual the makers of the Word Lens app. The popular app uses the smartphone’s camera to construe printed words from one language to other without the need for a network connection, and is designed to help read foreign signs, billboards or other written words in real time.

The financial terms of the deal has not been disclosed, but looks like the company will more likely incorporate its technology into Google’s app at some point in the future.

Word Lens is a pretty striking app on either app store, offering users an instant translation of any portion of text in an image. Apple had recently showcased the app in one of its TV ads, something that is unlikely to happen again. This buyout is a pretty huge deal for Google Translate; presumably Quest Visual’s special augmented-reality based technology will be put to use in Google’s Translate products across all platforms.

While the company changes over to Google, Quest Visual is making the app and all language packs free to download for a limited period of time, so those users who have never tried Word Lens, now’s a great time to grab the download. The app is available for iOS, Android, and Google Glass. It’s still unclear whether the app will continue in its current form, once the search giant finalises all the aspects of the deal. With BitSpin still on the Play Store, there is a possibility that Word Lens will continue to exist in its present form or we might just see a revamped version of Google Translate.

The biggest drawback of Word Lens is its modest language compatibility; it only supported translating Russian, Spanish, French, Italian, German, and Portuguese into English. Google can definitely pitch in here. Google Translate is by far the most progressive translation systems in the world, with 345 supported languages and more than 10,000 language pairs.

Besides that, Quest Visual should also help in speeding up the workflow in the translation app to a great extent, as currently Google Translate requires users to click a picture, wait for scanning, and then the app interprets the text in a different interface. Word Lens’ video-based translation is much quicker.

One of the major challenges both the companies will have to face is that Google Translate is based on cloud, and Word Lens translates locally. Can Word Lens’ maintain the same kind of speed when an Internet round trip comes into picture?

Christy Gren
Christy Gren is an Industry Specialist Reporter at Industry Leaders Magazine she enjoys writing about Unicorns, Silicon Valley, Startups, Business Leaders and Innovators. Her articles provide an insight about the Power Players in the field of Technology, Auto, Manufacturing, and F&B.
« Youtube in Possible Acquisition Talks of Twitch for $ 1 Billion
Dropbox Acquires 3D Photo Stitching Start-up Bubbli… Is Dropbox slowly turning into a slaughterhouse of apps? »
Leave a Comment
Close