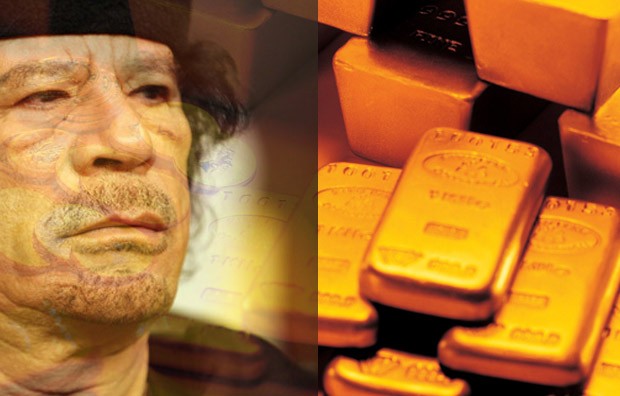 Estimated as being among the world’s top 25 gold reserves, Muammer Gaddafi’s assets – 143.8 tonnes of gold – at the Libyan Central Bank are reportedly worth $6.4billion.

No more guesses as to why 68-year old Gaddafi remains unfazed while the international community continues tries to cut off his funding by their onslaught of sanctions and asset freezes.

Many central banks choose to hold their gold reserves in international vaults in London, New York or Switzerland.

However, sources familiar with Libya’s gold market have reported that precious yellow metal reserves belonging to Libya have been kept within the country, hence the accumulation of what has become a billion-dollar Golden Security Blanket for Gaddafi.

Libya’s gold reserves were stored at the central bank in Tripoli before unrest broke out in Libya. However, reports say that since the spread of tension, these reserves may have been moved to another location, such as the southern city of Sebha – within reach of Libya’s borders with Chad and Niger.

And it is the same factor that makes gold so appealing for investors, criminals and dictators alike: that the value of this precious yellow metal is absolutely independent of a specific government.

In full recognition of this fact, Egypt, following massive unrest, banned gold exports so as to prevent former government officials from moving their wealth abroad.

A similar pattern has been observed with Iran, with the country rapidly increasing its gold reserves in recent years, in an apparent attempt to shift away from the US dollar and thus protect its reserves from risk of seizure.

A $6.4billion reserve of gold is enough to continue supporting a small army of mercenaries for a long time, and could be Gaddafi’s lifeline if he can sell them. And while bankers told the Times that international banks or trading houses were unlikely to buy any gold believed to be from Libya, Gaddafi might still find buyers in Chad or Niger.

“If a country like Libya wants to make their gold liquid it would probably be in the form of a swap – whether for arms, food or cash,” Walter de Wet, the head of commodities research at Standard Bank, told the Times.

With the United States featuring as the holder of the largest gold reserve at 8965.6 tonnes, other countries with large holdings include Germany with 3749.8 tonnes, China with 1161.9 tonnes, India with 614.8 tonnes and Venezuela with 401.1 tonnes.

“The gold market is reacting to the fact that Gaddafi hasn’t folded,” said Frank McGhee, the head dealer at Integrated Brokerage Services LLC in Chicago. “He’s backed into a corner, and if he remains in power under a cease-fire, a significant amount of uncertainty will come out of that region.”

The price of gold has risen recently, fuelled by growing instability in the Middle East and North Africa, and while gold prices continue to rise because of continuing uncertainty, Gaddafi’s gold reserves afford him the security of continuing attacks on civilians.