The General Motors Cadillac Lyriq, which will debut in April will be followed by the Ultium-powered GMC HUMMER EV, which will be launched on May 20.

Cadillac Showcases LYRIQ, the first from its EV portfolio

General Motors Corp. unveiled its electric crossover Cadillac Lyriq at the GM electric vehicles event, recently. The carmaker called the Lyriq “not a concept car but a precursor.” The vehicle will make its full debut in April this year. The crossover luxury EV is primarily on display to showcase the proprietary Ultium batteries that the company has developed. It will probably go on sale in mid-2021.

“Our team accepted the challenge to transform product development at GM and position our company for an all-electric future,” said Mary Barra, GM chairman and CEO. “What we have done is build a multi-brand, multi-segment EV. Strategy with economies of scale that rival our full-size truck business with much less complexity and even more flexibility.”

GM teased an unnamed car in January with similar features. Lyriq carries a modified version of the Cadillac badge like the teaser. There are the same set of vertical Led lights and an arching roof with an angled rear window. Lyriq has a long wheelbase and wraparound taillights.

The Lyriq carries the company’s Ultium batteries, which are capable of giving 50 kWh to 200 kWh and can give 400 miles or 644 kilometers on a charge with 0 to 60 mph acceleration in 3 seconds. The interior of the car is spacious with four seats and a rearseat touchscreen. The console has a 34-inch curved OLED display that has the standard high tech infotainment features and the usual dashboard gauges. 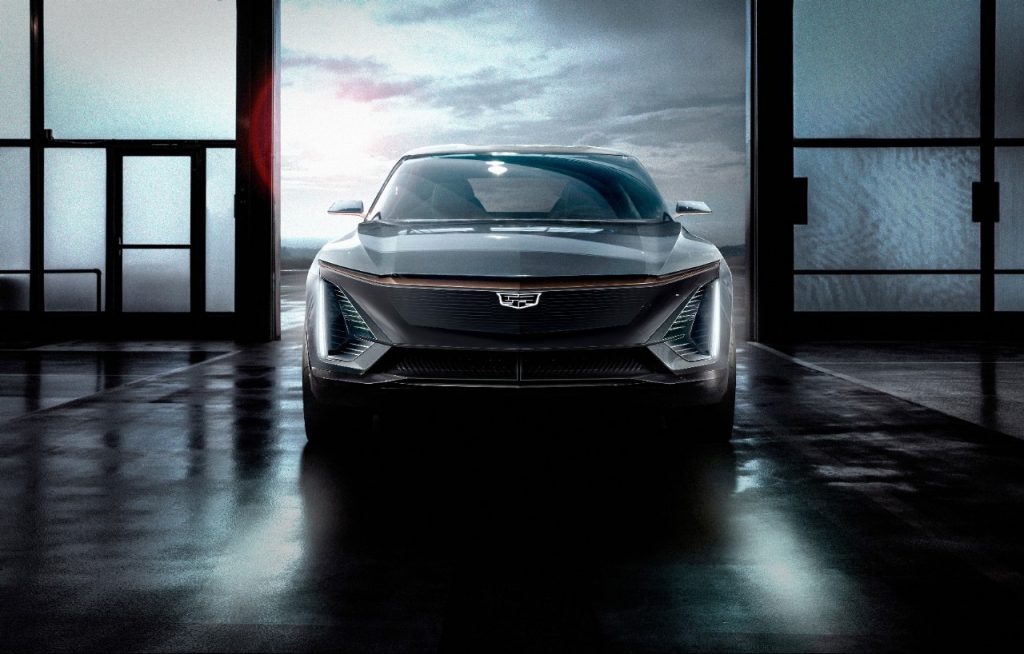 Cadillac furthered its recent product blitz today with the reveal of the brand’s first EV. This will be the first model derived from GM’s future EV platform. GM announced on Friday that Cadillac will be at the vanguard of the company’s move towards an all-electric future.

Ultium-powered EVs are designed for Level 2 and DC fast charging. They will have 400-volt battery packs and up to 200kW fast-charging capability. Though not specified it may also come with GMs super cruise adaptive cruise control technology that was announced for its Chevrolet Bolt EV at the same event. GM has announced that 22 of its new EV models will be carrying this super cruise feature by 2023.

The Detroit-Hamtramck Assembly Plant will be building the Lyriq model. GM is investing $2.2 billion for EV production at the manufacturing site.

GM’s electric vehicle strategy relies on a modular propulsion system and a flexible EV platform run on its proprietary Ultium batteries. GM hopes to compete in all segments of the EV market through its proprietary batteries and modular system—be it affordable transportation, a luxury car or high-performance trucks. The modular system will give GM economies of scale and reduce costs too.

“Thousands of GM scientists, engineers and designers are working to execute a historic reinvention of the company,” said GM President Mark Reuss at the event. “They are on the cusp of delivering a profitable EV business that can satisfy millions of customers.”
The Ultium battery storage can be stacked both horizontally and vertically allowing engineers to make optimal use for storage depending on the vehicle design.

It is predicted that the EV volumes will more than double to 3 million units in the US from 2025 to 2030. There will be more charging stations coming up all over, and the cost of EVs will also fall, further driving the demand for EVs.

GM hopes to monetize its battery technology by integrating it into the manufacturing process and licensing it to other vehicle makers.

The Lyriq, which will debut in April will be followed by the Ultium-powered GMC HUMMER EV, which will be launched on May 20. Production is expected to begin in Fall 2021 at GM’s Detroit-Hamtramck assembly plant.

Anna Domanska
Anna Domanska is an Industry Leaders Magazine author possessing wide-range of knowledge for Business News. She is an avid reader and writer of Business and CEO Magazines and a rigorous follower of Business Leaders.
« MIT is helping autonomous vehicles see below the surface of the road
US Stocks Take A Hit Following Coronavirus Spread »
Leave a Comment
Close